Get the latest details on Midway's upcoming sports game that will combine arcade-style gameplay, gridiron strategy and a few "supplements" for your players.

With its arcade years firmly behind it, Midway has since transitioned into a pretty successful publisher of console-exclusive games. But when it comes to its back catalog of arcade games, the transition wasn't easy. Arcade games are, for the most part, a little too shallow to just come home in their native forms. That's why we've seen the publisher attempt to update its various franchises, like Defender and Spy Hunter, with somewhat mixed results. The NFL Blitz series was one of Midway's final arcade smash hits. While the first few games were brought home, over the years the series lost some steam. Now, after a few years off, Midway is returning with a new Blitz game that ditches the NFL license, letting the developers get as nasty as they want to be. Now that we've spent some time with a near-final version of the game, we can say this: It seems like the Blitz series is poised to recapture the spirit of the original arcade games, while adding an entirely new element to the package.

That element is a full-fledged story mode. In it, you take a created team from the bottom of the game's fictional league all the way to the top. Along the way, cutscenes detail plenty of intrigue and other off-the-field drama. The story sets the stage in the team owner's office, as the owner pledges to go from worst to first and then makes a deal with the mayor to get a new stadium built if they can pull it off. From there you're sent to the created-team main screen, where you can play your next game or spend some of your funds on training. You can put guys into various training programs that will naturally enhance their statistics. But you'll have much faster gains if you put your players on different varieties of performance-enhancing "supplements." Of couse, the game makes that pretty risky. So if you juice your players up too far, they become much more likely to get caught by random drug testing, which is never good. So you'll have to ride the line just right to juice the players up enough to get them to play how you want them to play without having them get nabbed. You can even put your players on different types of juice. If you want to play it straight, there's simple, legal stuff like flax seed oil. But later on, you'll get access to a substance that's comically called "flax seed oil," quotation marks and all.

That same risk-versus-reward scenario comes up time and time again throughout the game. Injuries, for example, are a very big part of the game thanks to a new "dirty hit" command that lets you hit harder and inflict just a little bit more damage. Player injuries are often-spectacular displays of over-the-top mayhem, and they always include a quick X-ray view of a bone snapping or a ligament tearing. When your player is injured, you can choose to treat the injury, but this might mean that one of your star players will be out for a few games. Taking the dirty route--by hopping the player up on some junk that will fix 'em up faster--will get your player back in the game after only a few plays...most of the time. But doing so significantly lowers stamina, increasing the chance that he'll fumble and making him more prone to serious injuries.

The gameplay in Blitz: The League is an interesting mix of Blitz's arcade roots and a series of new systems and functions that make the game deeper, though without overly complicating things. That's a delicate balancing act, but from what we've played so far, things like the clash meter and unleash moves really do add something exciting to the game. The clash meter is sort of a second turbo meter, but rather than just making your players run faster, it's the gas that fuels the game's more interesting maneuvers. On defense, holding down the clash button while attempting a tackle is how you execute dirty hits. But you'll still drain the meter even if you miss the tackle, so you have to be careful. On offense, clash is used to drop the game into slow motion. While in this state, quarterbacks have a tendency to dodge or roll out of incoming sack attempts. Ball carriers throw stiff arms and generally break away from most tackles. Slow motion also makes things like catching passes easier, but it also doesn't really feel like some magic ability that makes offense a breeze. Also, you don't start out each play with a full clash meter. You have to fill up this meter by gaining yards on offense or by causing losses on defense. As a result, you have to be smart about when you use it, especially on defense. If you're on D with an empty clash meter, it can be pretty tough to add to it.

Doing things like injuring players, evading sacks, executing clash catches, and taunting the opposition on your way to the end zone gives you icons that go in to a separate meter. Filling this one up sets you up for an "unleash" ability. These are essentially pumped-up clashes. Unleash catches cause full-on catch animations that are practically impossible to stop. Unleash tackles are even more bone-crushing than the average dirty hit, giving you an even greater chance to cause injury or a fumble. Smart use of your clash and unleash meters seems like the key to success in Blitz: The League, but good, solid reflexes--you know, the sort that cause you to almost instinctively dive on a receiver well before the ball gets to him--are also a plus here.

In playing a handful of games and easing our way into the story mode, we've found that Blitz: The League has a whole lot going for it so far. It has a mean streak, for sure, but it rides that streak right up to the breaking point before interjecting some much-needed humor to lighten the mood. The game definitely doesn't take itself too seriously, making for a decidedly M-rated but funny take on the world of football. On top of that, the gameplay definitely seems rock solid, and the graphics and sound stand out as well. We'll have a full review of Blitz: The League soon. 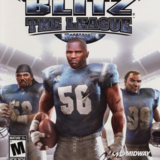