Black Eyed Peas getting down with The Urbz

Best-selling hip-hop group will appear in and provide the soundtrack for Electronic Arts' Sims in the City.

When it initially announced The Urbz: Sims in the City back in April, Electronic Arts billed the game as The Sims' hip cousin. Today, the publisher announced a move to increase the game's street cred with the help of hip-hop act the Black Eyed Peas.

The multiplatinum act's involvement will be twofold. First, they will produce the official Urbz soundtrack, which will contain nine tracks from the Peas' upcoming album Monkey Business. Each track will be remixed by the Peas' lead singer, Will.I.Am., into simlish, the game’s gibberish language.

“The opportunity for us to get involved in something like this is definitely hot. A lot of our fans play video games. We play video games...it seems natural for Black Eyed Peas' music to be used in a video game--especially this one," said Will.I.Am. "This is an unprecedented collaboration,” said Steve Schnur, worldwide executive of music and audio at Electronic Arts. “Never before has a band gone back in to the studio to rerecord their album in another language specifically for a game."

Besides helping out with the soundtrack, the Black Eyed Peas will be part of the game itself. Band members Will.I.Am, Fergie, Taboo, and Apl de Ap appear in the game as musicians who instruct players' sims in how to be hip to improve their social standings. When they complete enough reputation-enhancing missions, players will unlock the VIP spots in each of nine districts of The Urbz' metropolitan setting. Unlock all nine districts, and players will gain access to a skyscraper penthouse in the sky, and they'll "acquire control of the entire city."

Monkey Business is currently due out this fall, around the same time as The Urbz' November release on the Xbox, PlayStation 2, Nintendo DS, GameCube, and Game Boy Advance. However, only the console versions of the game will feature the Peas' full soundtrack. 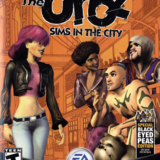 View Comments (1)
The Urbz: Sims in the City