"We're working on a game that will totally revolutionize both real-time strategy and 'god games' by bringing them together under one roof," says designer Peter Molyneux. Get the details here.

"I know we're going to get our heads...just...sliced off for this," says designer Peter Molyneux with a rueful smile, "but we're working on a game that will totally revolutionize both real-time strategy and 'god games' by bringing them together under one roof." The game he's referring to is Black & White 2, and for those keeping score at home, this isn't the first time the designer has made a grandiose-sounding promise. The original Black & White from 2001 was a much-anticipated game that didn't quite meet everyone's expectations. It let you play the role of a deity, and it let you take a god's-eye view of an island you lorded over...with the help of a gigantic walking animal pet whose demeanor would change depending on how much praise or abuse you heaped on it. Molyneux and designer Ron Millar (who has previously worked on Starcraft and Warcraft) claim that these are about the only things that will remain more or less the same in the sequel.

Molyneux and Millar explained that the upcoming sequel will be the result of a lengthy "complaining session" the two held in which each designer rattled off every annoying problem, however small, that either disliked about real-time strategy or "god games." The result is a game that still seems impressive, if for no other reason than the powerful technology behind it. Millar demonstrated that you can use the game's minimal interface (which most of the time consists of nothing more than your disembodied hand) to zoom in to the world so closely as to see individual blades of grass and ants walking among them. You can also zoom out to see the entire continental map of the world you're actively seeking to gain control of. Black & White 2 will also attempt to realistically model realistic physics using a "liquid-based" engine (rather than a particle-based one).

In plain English, this means the game will not only model weight, inertia, and momentum--from knocking a boulder off a cliff to start an avalanche, to simply picking up one of your tiny human citizens and hurling him off into the horizon---but also it means that when you enable "epic miracles," your most powerful godlike powers (such as summoning a volcano from the earth), you'll be able to watch as lava realistically pours down to the ground below and collects in pools, superheating everything in the vicinity (even starting forest fires in nearby trees by heat induction). Unfortunately, your godlike powers can be activated only within your area of influence, which is a glowing green border that hovers just outside your holdings. Fortunately, this means that within your influence, you can wreak divine havoc.

Molyneux and Millar went on to demonstrate how Black & White 2 will essentially let you play as "either a god of peace or a god of war." Choosing to play as a peaceful deity will generally mean that you'll focus on developing the small settlement you're given by building it out into a huge, prosperous city full of happy citizens that are well fed, well rested, and live in clean and comfortable quarters. To this end, Black & White 2 will make city building a snap. We were able to try for ourselves the straightforward way the game lets you build and develop. You can simply click and drag on existing buildings (such as residences for your villagers) to build multiple copies, and building up roads (along which your villagers walk) is also a matter of clicking and dragging. The game will automate production tasks like gathering food, so you'll be able to click and drag a brush on the ground to create farmland, and any nearby villagers will immediately take on the role of farmer, gathering food for your settlement.

Similarly, your first line of defense, city walls, will be just as easy to build by clicking and dragging. City walls will withstand all infantry attacks. You'll need siege weapons, an avalanche, or the help of your creature ward to punch through them. However, if you play as a god of peace, you'll probably find yourself grooming your animal ward to be more of an autonomous pet who will wander your territory on its own and even cower from battle. Even though a peaceful pet will possess a coat with a lovely sheen and will skip happily through your domain--spreading good cheer and even flowers in your soil--it will have a hard time in battle, preferring to brace any besieged walls with its own back rather than wander into the fray. Molyneux claims that the gentlest of pets will shun killing, and if ordered to attack enemy soldiers, it will actually shed tears. Peaceful gods can still amass armies to defend themselves from war, but they may find more success by building such spectacular cities that the inhabitants of neighboring townships actually pick up stakes and camp outside your city, seeking asylum in your glorious domain.

For the rest of us, victory will be achieved through conquest. Attacking a neighboring city will be considered an "evil" thing to do, much like beating your animal ward or torturing your citizens (such acts currently cause a small text prompt that reads "Evil" to float upward from your hand). This is done by training your citizens to be soldiers who will eventually form massive armies that number in the thousands, in addition to setting up a production line to support them. Your godlike powers extend even to the flow of time. So if your troops are low on supplies, you can simply click and drag a twilight sky back to a daytime position, making your workers put in extra hours (for which they'll become tired and resentful). Molyneux and Millar again displayed the "linked armies" system the game will use. Armies will be arranged into companies of swordsmen, pikemen, and archers, along with siege weapons. They can all be "linked" to one another to travel in unison when the lead unit is ordered to move. The game's ability to seamlessly zoom out to present the entire world at once will definitely come in to play in larger battles with huge armies. Units that survive battle will gain experience and become veterans that are more effective in battle. Additionally, they can actually be used to train new recruits to become more proficient.

If you decide to be a more belligerent being, you'll end up ordering your creature to commit hostile acts, like unprovoked attacks on enemies. Your creature ward will not only become more evil-looking (more hunched, darker-furred, and with more-conspicuous fangs and teeth), but also will spread decay and disrepair in its path. However, by using your animal companion as a warrior, you'll compromise its autonomy to the point where it will simply become another unit in your military. While a gigantic and foul-tempered wolf that walks upright and cuts through infantry like chaff can be useful in battle, it will also find little to do in times of peace. So without additional direction, it may end up standing in the middle of your domain while staring blankly into space. Then again, if you're hell-bent on conquering everything in sight, you may find this to be a small price to pay, especially when you're using the creature to smash through the game's 3D-modeled walls, which will fall away in chunks (rather than burst into flames and disappear a moment later).

Black & White 2 has a lot to live up to (take the first few sentences of this story, for example), but it seems to be a very technically impressive game with a very clear direction from two very experienced strategy designers with pedigrees that include Starcraft, Populous, and, of course, the original Black & White. The game will be released, in Molyneux's words, "in fall." And for those keeping score at home, yes, Mr. Molyneux is well aware of the irony inherent in using those exact words. 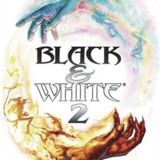