Widely leaked Sea of Dreams spot now officially confirmed by 2K Games, which says sequel is "destined" to be on PC, PS3, and 360.

Last week, a YouTube user posted what he claimed was the teaser trailer for BioShock 2. Allegedly from the just-released PlayStation 3 version of the game, the spot showed a now-older Little Sister holding a doll resembling a big daddy. As she receded into the distance, silhouettes appearing to be art deco skyscrapers rose from the sand before the trailer cuts to a barnacle-encrusted logo for "BioShock 2: Sea of Dreams."

After being reticent for seven days, today 2K Games finally came clean, releasing the trailer to the public. Viewable and downloadable in HD on GameSpot, the game is also available from the official BioShock 2 site and on Xbox Live Marketplace. Another version will go live on the PlayStation Network sometime today.

Given that the BioShock 2 trailer is available for download on two consoles and the PC, it seems a forgone conclusion that it will be available on all three platforms. However, 2K rep Charlie Sinhaseni was somewhat cagey about the details, saying only "BioShock 2 is destined for the PlayStation 3, Xbox 360 and Windows PC platforms." Reps would not comment on whether or not the game would be released on all three simultaneously.

For more on BioShock 2--and BioShock 3 and the BioShock film --check out GameSpot's previous coverage. 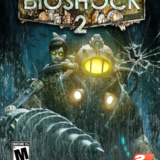