Source: Notorious industry-info-leaking blog Surfer Girl Reviews Star Wars, following up on a job listing on developer-oriented news site Gamasutra. What we heard: 2K Boston's BioShock has proved to be both a critical and financial hit for Take-Two. Not a month after the PC and Xbox 360 shooter...

What we heard: 2K Boston's BioShock has proved to be both a critical and financial hit for Take-Two. Not a month after the PC and Xbox 360 shooter debuted to glowing reviews, Take-Two Interactive chairman Strauss Zelnick boasted that more than 1.5 million copies of the game had been shipped to retailers and coyly stated that the property was being considered as a potential new franchise. 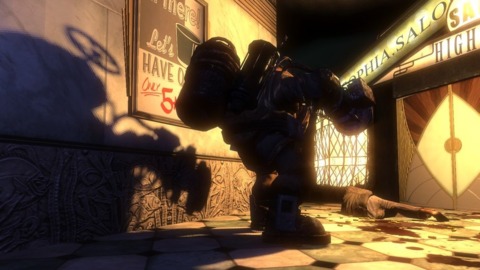 Although a continuation of the series seems all but assured, it appears that Ken Levine's 2K Boston and 2K Australia crew--nee Irrational Games--won't be on development duties for the game. Pointing to a recent job posting on developer-oriented news site Gamasutra, notorious industry-info leaker Surfer Girl notes that 2K Games is hiring for a lead animator at its newly established studio in the San Francisco area, 2K Marin.

Although the current text seems innocuous enough, the wondrous technology that is Google cache reveals that the studio will be populated by BioShock alums. "Some of the creators of the award-winning BioShock are starting up a new studio in the Bay Area and are looking for a Lead Animator," reads the original job request. Notably, the job listing also sees a "fine art background" as being a plus, reminiscent of the much-lauded art deco style of BioShock's city under the sea, Rapture.

Citing her gossamer sources, Surfer Girl's explanation for the new studio indicates that internal drama was one contributing factor in the formation of 2K Marin. "2K Boston is still recovering--a good chunk of the BioShock team did not want to work with Ken ever again, and 2K definitely understood the sentiment and let them set up a new studio so that they can make Bioshock 2, leaving Ken with Project X," she said. "A good chunk of the other senior 2K Boston people who were sick of Ken but didn't move to San Francisco ended up scattering to other AAA developers instead. [At 2K Australia], they're essentially rebuilding a team from almost scratch again."

As for Levine and company, Surfer Girl states that she has confirmed with one of 2K Marin's new staffers that the mysterious Project X will be set in the X-Com universe. "Project X is a new X-Com title, as previously reported by the Internet, and this post has been confirmed by one who left for San Francisco," she says. Take-Two acquired the rights to the classic tactical sci-fi franchise from Atari in 2005, after the series lay dormant following the less-than-spectacular X-Com: Enforcer in 2001. X-Com: UFO Defense, the original game in the series released in 1993, is widely heralded as one of the greatest games ever made and has been inducted into GameSpot's own Greatest Games of All Time.

The original job listing clearly indicated that 2K Marin is being staffed by BioShock alum. It is also worth noting that 2K Australia's Web site clearly indicates the studio has moved on to other projects. "We had an incredible run with BioShock, and we're looking forward to the years ahead when we bring you bigger and even better titles," reads the studio's landing page.

The official story: Take-Two had not returned requests for comment as of press time.

Bogus or not bogus?: Not bogus that 2K Marin is picking up the BioShock franchise. Entirely plausible that 2K Boston is working on an X-Com sequel. No comment on the office drama.

There are 255 comments about this story
Load Comments (255)