Upon reporting its holiday-quarter earnings in February, Capcom didn't have much to chirp about. On top of revealing profit margins that plummeted 95 percent year-over-year, the publisher said that one of its headline fiscal year-end releases, Bionic Commando, had been bumped beyond its March 31 deadline to sometime in May. 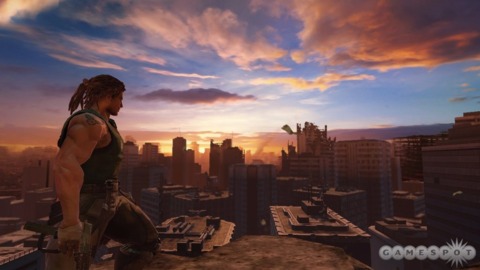 What a difference just one month can make. Following on from the critically and commercially successful launches of Street Fighter IV and Resident Evil 5, Capcom said today that Bionic Commando has been locked into a May 19 release on the Xbox 360 and PlayStation 3.

In many ways a return to Capcom's 8-bit classic released for the NES 20 years ago. Bionic Commando for current-generation consoles focuses on genetically enhanced supersoldier Nathan Spencer, who finds himself falsely imprisoned. After a bioterrorist attack threatens Ascension City, he is released to save the world. Spencer will have use of the series' signature deployable arm to swing from rooftops and pulverize villains.