Sega bringing squad-based third-person shooter to Windows computers next month at retail and through download channels.

Binary Domain is coming to the PC. Sega today announced that the squad-based third-person shooter, which shipped for consoles last month, will arrive for Windows machines in April.

In a statement, Sega senior vice president of marketing Gary Knight said, "We were seeing increasing numbers of players asking for a PC version. So we listened and delivered."

Binary Domain will arrive for the PC as a boxed product at retail, as well as through digital channels. Sega did not provide a specific release date for the PC, but a listing for the game on Valve's digital distribution hub Steam indicates the title will launch on April 6 for $40.

Binary Domain was released for the Xbox 360 and PlayStation 3 on February 28 to mostly positive review scores. It is set in Tokyo in the year 2080, a time when humans are locked in battle with robots. The game is the latest project from Toshihiro Nagoshi, who is best known for his work on the Yakuza and Super Monkey Ball franchises.

For more on Binary Domain, check out GameSpot's review of the Xbox 360 version. 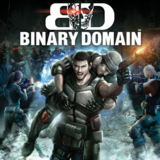