Plus, check out a brand-new screenshot from the soon-to-launch licensed boxing game.

Big Rumble Boxing: Creed Champions is launching very soon, and now Survios and movie studio MGM have released the game's launch trailer. Not only that, but GameSpot can reveal an exclusive image from the arcade-style boxing game, which you can see below.

Creed Champions launches on Friday, September 3 for console and PC, and it's the second game that Survios made in partnership with MGM, following 2018's Creed: Rise to Glory for virtual reality. The games feature characters from MGM's Creed and Rocky movie franchises.

The new game lets you play as Adonis Creed, Rocky Balboa, Apollo Creed, Ivan and Viktor Drago, and Clubber Lang, among others. In total, there are 20 playable fighters. Creed Champions features a storyline that covers "familiar and untold legendary tales," while the game lets you relive some of the iconic scenes from the films.

Creed Champions will be released on PS4, Xbox One, Nintendo Switch, and PC, while the game also is supported on PS5 and Xbox Series X|S through backwards compatibility.

As for the film series, Rocky is celebrating its 45th anniversary this year. The the next Creed movie is scheduled to be released in 2022, with Michael B. Jordan set to star and direct. 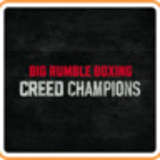