Better late than never. The demo of Battlefield 2: Modern Combat for the Xbox 360 is now available over Xbox Live, a few days after it was originally scheduled to begin battle. The demo weighs in at a featherweight 382MB and is free for all Xbox Live subscribers.

If last week's reports from the game's official Web site hold true (the information has since been pulled), the demo will be strictly multiplayer and will support up to 24 gamers. The next-gen version has been tweaked a bit, including overhauled graphics, slight changes to the position of objects in levels, and a more unified feel between the single-player and multiplayer modes.

Battlefield 2: Modern Combat for the Xbox 360 is scheduled for release on April 11. The game was previously released on the PlayStation 2 and Xbox. The Xbox 360 version is rated T for Teen and will retail for $59.99. For more information, check out GameSpot's previous coverage. 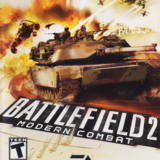