Earlier this month, Rayman creator Michel Ancel told French magazine JeuxVideo that he'd been in preproduction on a sequel to Beyond Good & Evil for a year, but the project had yet to receive a green light from Ubisoft. That go-ahead has apparently been given. The publisher capped off its Ubidays press event with a teaser trailer for Ancel's next project, and the clip featured the porcine sidekick of the original game, Pey'j.

In the teaser, a camera swoops down across a desert wasteland until it focuses in on a broken-down hovercar. A woman sits atop the car (presumably Jade, the first game's protagonist), her face obscured by an umbrella. On the other side of the machine, Pey'j rests until he is disturbed by a fly. The man-pig then engages in a tug-of-war of sorts, attempting to inhale the fly through his ample nostrils. Meeting success after a brief struggle, Pey'j mumbles, "Fifty." A few seconds and some more snorting later, he grunts, "Fifty-one."

The teaser gave no details as to platforms or release date. However, as part of the company's earnings report last week, Ubisoft did say that it had a pair of unannounced sequels in existing franchises set for release by the end of March.

Released in November of 2003, Beyond Good & Evil won critical acclaim for its mix of traditional action adventure elements with stealth segments, a picture-taking gameplay mechanic, and an engaging story of a young woman pulled into a rebel faction to blow the lid off of an interstellar government conspiracy.

Despite the accolades, the game was lost in a slate of holiday releases already rich in the action and adventure genres, including Ratchet and Clank: Going Commando, Jak II, Sphinx and the Cursed Mummy, I-Ninja, Lord of the Rings: Return of the King, Harry Potter and the Sorcerer's Stone, and Ubisoft's own Prince of Persia: The Sands of Time. According to the industry-tracking NPD Group, Beyond Good & Evil sold a respectable 271,000 copies at US retailers, although most of those sales came in the wake of drastic price cuts. 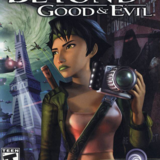 There are 356 comments about this story
Load Comments (356)