Bethesda trying to lock out Interplay from Fallout IP

Back in June, financially strapped publisher Interplay launched a teaser website for its forthcoming massively multiplayer online role-playing game, Fallout Online. The site used many iconic assets from the series, including the cheery Vault Boy mascot and the stylized Fallout logo.

The use of Fallout assets did not sit well with Bethesda, which bought the Fallout license outright from Interplay in 2007 for $5.75 million. The deal allowed for Interplay to make a Fallout MMORPG, provided such a project started within two years. In April 2009, Bethesda opted to revoke the Fallout MMORPG rights, just as Interplay had entered into a development deal on the project. The two publishers then sued each other and have spent over a year in litigation.

Now, according to legal documents obtained by industry site Gamasutra, the legal battle between the two companies has re-erupted. On November 19, Bethesda said Interplay's use of the aforementioned Fallout assets was a violation of the two companies' trademark license agreement, an assertion Interplay contested in its own filing on December 3.

Bethesda responded on December 20 with a new filing that said the agreement allowed for the use of the Fallout trademark in conjunction with an MMORPG--and nothing else. It contends that all other Fallout assets, including those used on the teaser website, are the intellectual property of Bethesda and cannot be used in or to promote Fallout Online, which is already in development at Bulgarian shop Masthead Studios (Earthrise). The game is currently slated to launch sometime in 2012. 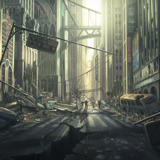 There are 520 comments about this story
Load Comments (520)