Two and a half years ago, Activision jettisoned the license to make games based on the popular sci-fi Star Trek television and film series. The unusual move followed a long and acrimonious struggle that saw the Call of Duty 2 publisher accuse Viacom, owner of Star Trek studio Paramount Pictures, of not producing and promoting Star Trek films and television shows at the rate it was when the two companies signed a 10-year licensing agreement in 1998. Activision alleged that "through its actions and inactions, Viacom has let the once proud Star Trek franchise stagnate and decay," and claimed that Viacom recently admitted that there are no current plans for new Star Trek movies.

The next 30 months saw only two games based on Star Trek, one of the most popular science-fiction franchise of all time, hit the market: The multiconsole space-combat sim Star Trek: Shattered Universe, which critics gave a pummeling akin to a Klingon bar brawl, and Star Trek: The Birds of Prey, which got sparkling reviews...for a mobile-phone game.

Hopes began to rise when novice developer Perpetual Entertainment announced plans for the massively multiplayer online role-playing game Star Trek Online. Then, the first word on the non-MMORPG Star Trek license came in January 2005. That's when Harry Lang, director of the licensing division of Paramount Pictures, hinted on the forums of the fan site Star Trek: Gaming Universe that a new Trek game was in the works. Earlier this month, Lang used the same forums to confirm online reports that Mad Doc Software (Empire Earth II) was developing Star Trek: Legacy, a real-time strategy game for the PC and Xbox 360. When contacted by GameSpot, Mad Doc reps redirected questions about the game to Elder Scrolls IV developer/copublisher Bethesda Softworks, which promised an announcement "soon."

"Soon" apparently meant today, which is when Bethesda announced it has indeed acquired the Trek license. "Being able to work with the entire universe of this beloved series is an incredibly exciting opportunity for us," said Todd Vaughn, Bethesda Softworks' vice president of development. "We have some great ideas about where we want to go with this license and having the exclusive right to develop and publish Star Trek games across all platforms ensures that every Star Trek game will be a quality game worthy of its name."

Bethesda confirmed Star Trek: Legacy is indeed being developed by Mad Doc for PCs and the Xbox 360 by the end of 2006, and gave the first concrete details about the game. It will cast players in the role of a Starfleet Admiral charged with commanding a task force of Enterprise-esque starships through large and small-scale battles. Its story will be set during every Star Trek television series, including Star Trek, Star Trek: The Next Generation, Star Trek: Deep Space Nine, Star Trek: Voyager, and Star Trek: Enterprise.

Today, the traditionally PC- and console-focused Bethesda also announced Star Trek: Tactical Assault, its first foray into the handheld market. Set for release on the PSP and DS in September, the game will sport "real-time spaceship combat from the universe of the original Star Trek series." Its single-player campaign will allow players to assume the role of a Starfleet or Klingon commander, and will sport a storyline with "branching missions and multiple outcomes." In addition, the DS version will let players face off in "head-to-head wireless multiplayer combat." Tactical Assault is being developed by Quicksilver Software, the studio behind the highly popular Star Trek: Starfleet Command.

Neither Star Trek: Tactical Assault nor Star Trek: Legacy has been rated yet by the Entertainment Software Ratings Board. 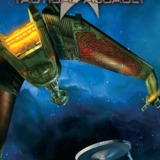