Here are the best PS4 controllers still worth picking up in 2022.

See at Walmart See at Razer See at Amazon

The PS4 is technically outdated tech at this point, but most major game releases still find their way to the PlayStation 4 in addition to the PS5--at least for now. Plus, if you're playing PS4 games on PS5, you can save some cash by picking up extra PlayStation 4 controllers for multiplayer rather than shelling out for $70+ DualSense controllers. Additionally, the DualShock 4 and other PS4 controllers are still wonderful options for gaming on PC or mobile devices. With that said, we've rounded up the best PS4 controllers in 2022.

The first-party DualShock 4 still remains one of the best PS4 controller options for its affordable price, wide range of colors, and familiar, comfortable fit. It's proven to be one of the most popular and reliable controllers for experiencing all the best PS4 games--especially since all it takes is the push of a button to share incredible moments like a hilarious glitch or beating a Bloodborne boss without getting touched. But the DualShock 4 isn't the only PS4 controller worth considering.

The DualShock 4 is a great pad, but when you look at what Microsoft has done with the best Xbox controllers, it can feel a little disappointing not having an official PS4 Elite controller on par with the Elite Series 2. Sony did release a back-button accessory last year that maps two of the DualShock 4's buttons and lets you keep your thumbs on the analog sticks when you want to crouch, jump, reload, or anything in between, but it doesn't bridge the gap entirely. However, there's no shortage of third-party PS4 controllers that offer unique features for enhancing your gaming experience, with excellent options available from Scuf, Razer, and more.

If you've managed to snag a PS5, make sure to check out our roundups of the best PS5 controllers and best PS5 accessories. We also have lists covering the best PlayStation gaming headsets and the best keyboard and mouse combos for PlayStation.

Editor's Note: Article updated on June 21, 2022. Some of the controllers on this list are hard to find in new condition. Since new PS4 controllers aren't being manufactured, stock is low across the board. You may have to settle for a preowned controller. That said, you can still get multiple DualShock 4 color options in brand-new condition. 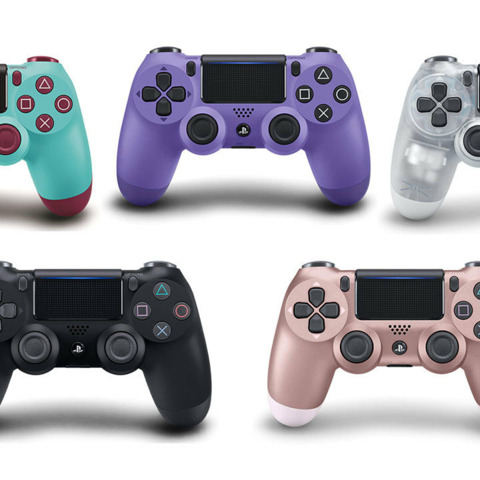 The DualShock 4 is a fantastic gamepad that improves on the classic DualShock form factor in all the right ways. The grips on the official Sony controller feel great, the triggers are satisfying to pull, and the Share button makes it easy to save and share screenshots and videos of your best gaming moments. The one downside is that the battery life can feel a little short, requiring you to charge it daily with a micro USB cable if you're playing a game for long sessions. Despite that, the DualShock 4 works very well when it comes to playing every single game on the system. Unfortunately, it can be hard to find some DualShock 4 colors in stock at list price in 2022, as focus shifts to the first-party DualSense. 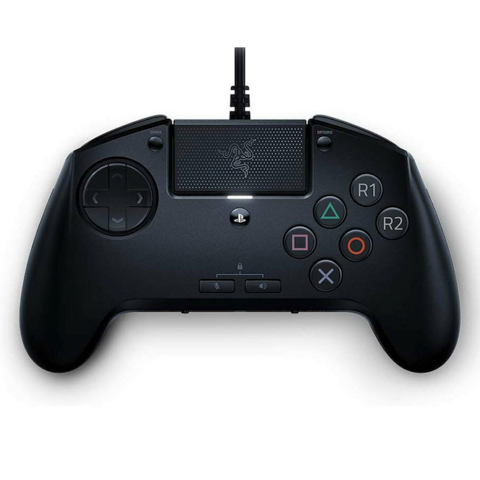 The Razer Raion is a fight pad, which means it's optimized for fighting games. It might be strange to buy a gaming controller without an analog stick, but if you're looking for an excellent way to play fighting games without dropping a huge sum of money on a full stick, then the Raion is an excellent option. This wired controller features a great, clicky D-pad and buttons that resemble a fight stick as opposed to a regular controller, with an extra button in each row of buttons. It's also pretty light, so it's comfortable holding it with one hand and tapping the buttons, piano-style. Thankfully, it also includes digital buttons for every DualShock 4 shoulder button and trigger if you prefer using those.

With the Raion, you don't need to switch to a fully-featured controller for things like character customization within your favorite fighting games. It features a switch that lets you map the D-pad to the left and right analog sticks, making it possible to do everything you need on the PS4. Of course, the lack of real analog sticks and triggers makes it nigh impossible to play most games on the console, but if you're customizing a character or just viewing in-game models, then this switch makes it easy to do so--a separate switch also lets you turn the L1 and L2 buttons into L3 and R3.

It's not for every kind of a gamer, but if you're in the market for a fight pad, then it's hard to beat the Raion. It's comfortable and performed well in every fighting game I played, from NetherRealm fighters like Mortal Kombat 11 and Injustice 2 to Capcom's Street Fighter V and Bandai Namco's Tekken 7. At half the price of Razer's Panthera Evo fight stick, it's a very attractive controller for fighting game fans. Once you get used to it, you probably won't miss the lack of a thumbstick.

See at Walmart
See at Razer
See at Amazon 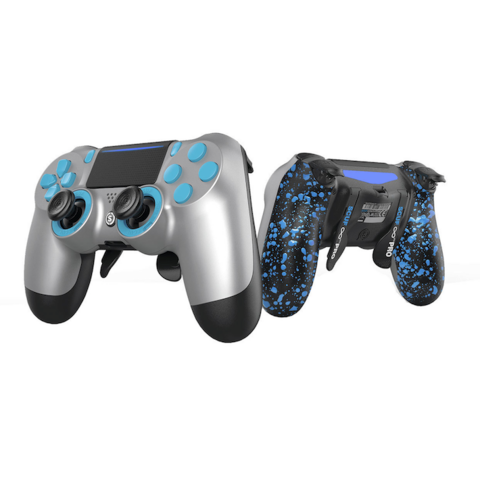 The Scuf Infinity4PS Pro is perfect for anyone who likes the DualShock 4's shape and design but wants a little extra customization and utility on top of the form of the official controller. The Infinifty4PS Pro features textured grips, interchangeable thumbsticks, and programmable back paddles--the latter makes use of a magnetic "EMR" key that you simply place on the back of the controller and then press the buttons you wish to remap to the paddles. These delightful features are all par for the course for a Scuf controller, but it's the different types of customizable triggers that make the Infinity4PS Pro so special. The basic triggers are similar to the standard DualShock 4's, while the Trigger Control System offers trigger stops, adjustable hair triggers, and covers for the trigger buttons and extenders. These, of course, come at an increased cost, but these features are beloved by fans of shooters.

Scuf also offers digital tap triggers. These turn the shoulder buttons and triggers into buttons that resemble a PC gaming mouse, clicking just like one as you take aim and fire at the enemy. It feels incredible and is extremely useful when using single-fire weapons like marksman rifles or pistols, though it worked great for automatic weapons as well. These triggers are some of the best I've ever used, but they're specifically designed with shooters in mind and don't feature any analog input like the standard trigger system. This makes them hard to use for games that rely on gradual trigger presses, like Gran Turismo Sport and Trials Rising, so it's important to think about what type of games you play before purchasing this costly controller. 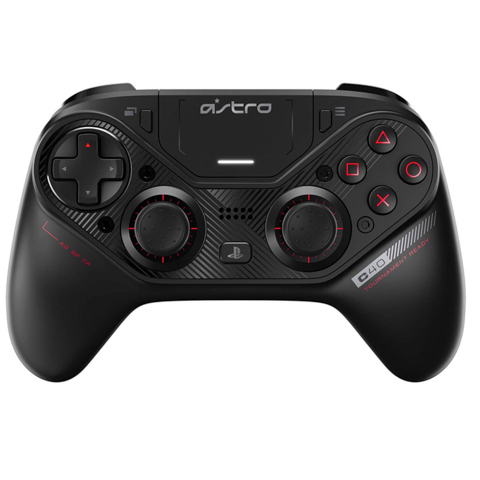 Astro is well-known for its high-end gaming headsets and audio equipment, but the brand has recently ventured into professional-grade controllers with the C40 Tournament Edition. Not only is it ergonomically comfortable, but the C40 has a ton of customizable controller settings. The most important thing to note is that the left analog stick can be swapped to feel like an Xbox or PlayStation controller, letting it feel like a custom controller made just for you no matter your preference. The modded controller might make you doubt its build quality, but the C40 is unquestionably solid. You can't configure the sections to resemble the older Nintendo Pro controller setup (with both analog sticks near the top of the controller), but maybe that's a good thing.

Another key feature is the programmable paddles on the back of the controller. Of all the high-end gamepads with extra buttons, the C40 has the most sensible placement, and these buttons are intuitive from the get-go. The ease of use extends to the triggers and bumpers; their shape and low actuation resistance is a definite upgrade over the DualShock 4. The Astro C40 is quite pricey at $200 and currently difficult to find in stock, but it's all around the best if you're looking for something that's both tuned for competitive gaming and customization. You might have to settle for a preowned version of the C40 if you're interested. That said, it's easily the b 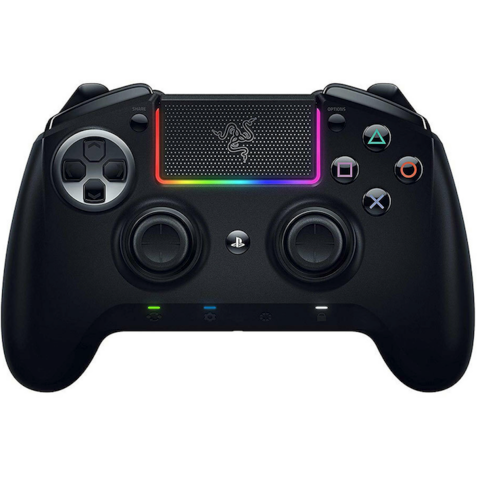 The Raiju Ultimate features the same analog stick placement as the DualShock 4 and boasts interchangeable thumbsticks and D-Pad. It's also equipped with two remappable back paddles and an extra two shoulder buttons. The back paddles are larger and more square-like than Scuf's paddles--this makes them less comfortable, but they're still easy to use. The Raiju Ultimate's extra shoulder buttons, on the other hand, are particularly great. They click satisfyingly like a gaming mouse and are easy to press with your fingers resting on the triggers. Speaking of the triggers, they feel similar to the Xbox One's and feature trigger stops.

The face buttons also click like a mouse and are extremely pleasing to use in everything from shooters and fighting games to action-adventure titles like Marvel's Spider-Man and Yakuza 0. The D-pad feels pretty good to use, though it is less like a D-pad and more like four separate buttons. One of the modular D-pads is actually just four directional buttons, while the other is one solid piece of plastic that makes it easier to hit diagonals in fighting games. And lastly, the analog sticks move smoothly and feel accurate.

Satisfying is a great way to describe using Razer's Raiju Ultimate, and using the Raiju app for mobile devices makes remapping the extra buttons and creating new profiles extremely easy--you can even swap between profiles with a button on the controller. If you're looking for an Elite-style controller with the same stick placement as the DualShock 4, then Razer's Raiju Ultimate will work excellently in nearly every situation. 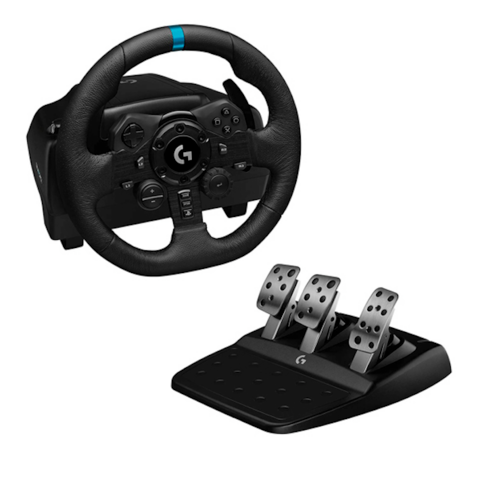 If you're looking to become a pro at the best PlayStation racing games, you'll likely want to invest in a good racing wheel and set of pedals. Logitech's G923 racing wheel is our pick for playing racing games on PlayStation. It features the company's TrueForce technology that delivers high-definition force feedback synchronized with your gameplay for heightened realism and responsiveness. At this time, TrueForce is only available for select games: Grid, Assetto Corsa Competizione, iRacing, Gran Turismo Sport, Showrunner, and Dirt Rally 2.0.

A programmable dual clutch gives you more traction with less smoke to get you off the starting line faster, and the accompanying set of pedals allows for pressure-sensitive braking. You can also customize your rig with G Hub software, letting you build multiple profiles, adjust your wheel's sensitivity, and much more.

With a durable build made of aluminum, steel, and leather, the Logitech G923 is made to hold up over time. Even better: It's directly compatible with PS5 games as well, so this is a wheel you can count on being able to use for years. 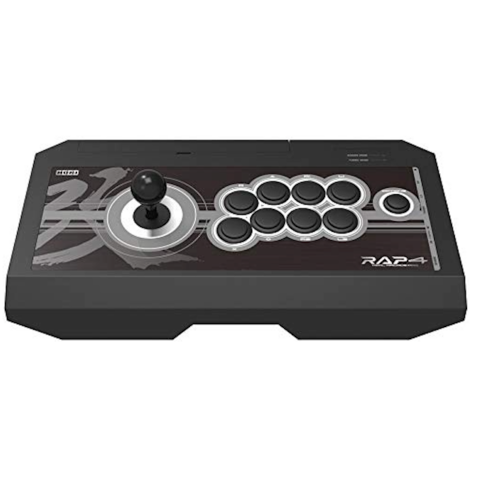 The Hori Real Arcade Pro 4 Kai wasn't always our first choice for fight pads or arcade sticks on PS4. But nowadays it's hard to find fight sticks that are still available for the PlayStation 4. Manufacturing of PS4 controllers has largely stopped, and that's even more the case with specialty controllers like fight sticks. That said, the Real Arcade Pro 4 Kai is still an awesome fight stick for the price. This officially licensed controller has a responsive and great-feeling stick as well as eight great face buttons that do a pretty good job replicating the feel and sound of "real" cabinets. All of this is housed in on a great board that has a touch panel, turbo button, and custom mapping support. The Real Arcade Pro 4 is compatible with PS4, PS3, and PC via XInput. While it's not nearly as customizable as some of the pricier fight sticks that are hard to find nowadays, it's still a solid option for the price.