Best Of 2021: How Deltarune Chapter 2 Portrays A Disturbingly Dark Relationship

The newest installment of the indie RPG left me astonished--and terrified.

The follow-up to indie mega-hit Undertale, Deltarune has been releasing in chapters as creator Toby Fox and his small team finishes them. So far, two chapters have been made available as freeware on PS4, Switch, and PC--though future installments may be paid. Both chapters feature the same offbeat humor, endearing characters, and experimental, genre-blending gameplay that made Undertale so beloved, but amped up to new levels. While the chapters are short, they're hard to put down, and once you've started playing, it's tough to stop until you've hit the endpoint.

Part of the enduring appeal of Undertale has been the numerous hidden secrets, Easter eggs, and small hints of something bigger and more sinister going on in this world of monsters--hints which have continued through into Deltarune. The the "genocide" path in Undertale, which takes the story down a cruel, bloodthirsty road of death and destruction--with permanent consequences for subsequent playthroughs--has also spurred a great deal of discussion over the years. With Chapter 2, it feels Deltarune is building on some of the dark undercurrents of Undertale. While Deltarune Chapter 1 was mostly straightforward in its story, Chapter 2 presents an alternate path for players to discover--one that portrays a dark and disturbing story of abuse and manipulation that is shockingly raw and terrifying.

A short way through Chapter 2, you part ways with your usual party members, Susie and Ralsei, only to be paired up with Noelle, a deer-girl with a timid demeanor and a newfound talent for ice magic. She basically takes on the role of the mage in your party: weak with powerful attack magic. Much like Undertale, you don't have to kill any enemy you encounter. In fact, Deltarune encourages you to spare them by creating a village where all your spared enemies can live. However, you can also choose a path of violence--and perhaps even more disturbingly, you can manipulate Noelle into joining you in your destruction.

In what fans call the "Snow Grave" route, you destroy your foes in a very specific way: having the player character Kris command Noelle to cast her "IceShock" spell to freeze them solid. As more and more enemies are iced, their frozen forms begin to litter the map. Eventually you encounter a shopkeep who offers you an ice spell enhancement ring that is impossible to afford… but, if you repeatedly command Noelle to "Get it," somehow, the item is obtained. While what Noelle does to get the ring is left unclear, one thing is certain: she is clearly distressed by what she did.

As you freeze more and more enemies, Noelle becomes more and more subservient to Kris, which you can see in her animations and in-fight dialogue snippets. The world changes, too, with glitched-out backgrounds and far fewer enemy and obstacle encounters. Normally, this leg of the game has some simple environment puzzles to solve, which Noelle tries her best to help you with. In the Snow Grave route, however, when you encounter these puzzles, you demand that Noelle solve them for you. It's clear that she's scared and worried about electricity from the device hurting her, but all you say is "proceed" while cornering her against an electric barrier.

The rationalizing Noelle goes through amongst all of this--telling herself Kris is making her do what's good for her and helping her to become stronger--is distressingly familiar to anyone who has been in an emotionally abusive relationship with a friend, family member, coworker, or loved one. When you obtain the Thorn Ring–an item which reduces the cost of ice spells, but causes the wearer to take constant damage from pain--and equip it on Noelle, she has no objections, even as her life drains out during fights. In her mind, she deserves the pain. It makes her "stronger."

Noelle's attempts to numb herself to what's happening to her come to an abrupt halt when you encounter Berdly--your classmate-turned-sort-of-antagonist--in battle and her pain and anguish finally comes through. In a climactic moment, you order Noelle to cast the "SnowGrave" spell--which she insists she doesn't know--and when you finally push her to her limit, she casts the most powerful ice spell she can muster. It freezes Berdly solid, presumably leaving him dead, and after saying she "doesn't feel good," Noelle leaves the party. It's later on insinuated in a conversation with Susie that Noelle has had a mental breakdown.

Perhaps the most disturbing element to this is that, aside from what you and Noelle (and possibly Susie) see, everything else is surprisingly normal. Spamton still spouts memes, Ralsei is cheerful and oblivious, and the big boss Queen is upset that her subjects seem to be disappearing, but still eager to converse and drop some jokes. Even when you get back home to the light dimension, Noelle's still visiting her sick father in the hospital and you and Susie have a sleepover. It's all business as usual, with Noelle writing it off as a bad dream, even though Berdly hasn't woken up from falling asleep in the school computer lab. It's only when you're briefly alone with Noelle that the abuse is acknowledged. Much like in reality, emotional abuse is often invisible to others.

Thinking about Noelle's suffering still makes me feel terrible. I won't judge anyone for playing through this route--while most players will undoubtedly stick to the light and cheery side of Deltarune, the willingness of the game to portray this sort of horrifying emotional abuse is striking. Many games offer “moral choices,” but few show those choices’ consequences in such a raw and authentic way, and that’s one of the reasons Undertale and Deltarune are so compelling. If subsequent chapters offer similar "dark" routes, then we could see a game that offers both bright, heartwarming moments and the potential for unspeakably cold, heartless cruelty--all depending on player choices. I'm not sure where Toby Fox plans to take this story next--or what choices he'll offer us--but he definitely has my attention. 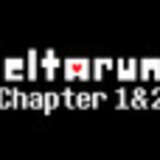