The Best Lego Sets And Gifts For Christmas 2021

If you're shopping for an avid Lego enthusiast this holiday, we've got you covered with a list of 25 Lego sets that would make great gifts.

When it comes t toy gifts, you can never go wrong with Lego. The iconic building blocks of multiple generations is now more creative than ever, as the brand has expanded beyond its popular licensed collectibles and into the world of more original ideas over the last couple of years. That's not to say that Lego doesn't have a presence in the world of pop culture, as its DC, Marvel, and other tie-ins are still fantastic for unwrapping and spending an afternoon assembling.

Last year saw the arrival of clever Nintendo-themed sets, including the Lego NES and a lineup of Super Mario course-building sets, while this year has seen a few new sets unveiled in the Lego Ideas range. While this guide solely focuses on Lego, we have plenty more gift ideas in our gift guide hub. From Marvel and Star Wars gifts to Funko Pops and Fortnite, chances are you'll find some solid ideas regardless of what you're looking for. And when looking for gifts for gamers, don't forget to take a peek at our dedicated gift guides for Nintendo, PlayStation, Xbox, and PC. 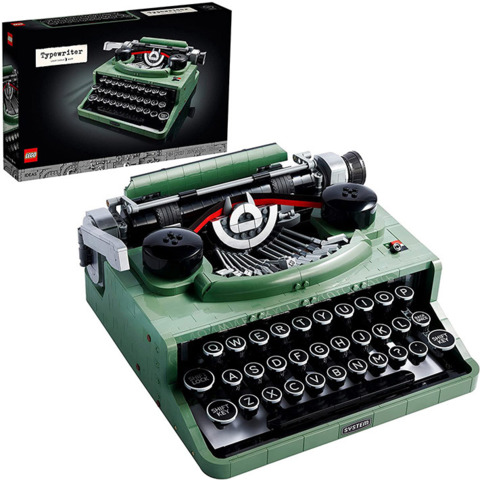 Take a trip back in time, to an age of costly spelling mistakes, a collection of ribbons, and bottles of ink with this Lego set. While you won't be hammering out any letters on this Lego typewriter, you will likely be spending quite a few hours assembling it. The design is inspired by the classic typewriter used by the Lego group’s founder Ole Kirk Kristiansen, it features a center typebar that rises each time a letter key is pressed, and it even has a platen roller that you can feed real paper into. 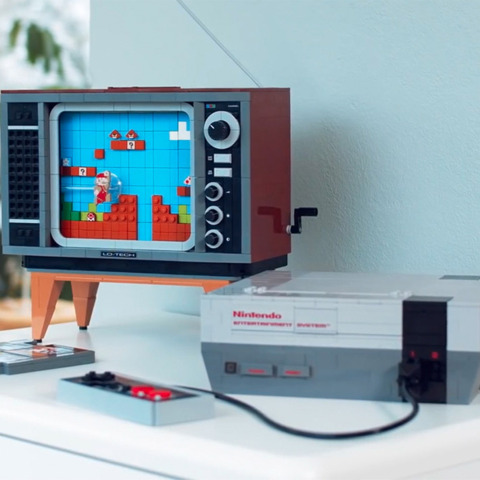 The Lego Nintendo Entertainment System is easily one of the cooler kits around. Released in celebration of Super Mario Bros.'s 35th anniversary, the 2,646-piece set lets you create stunning models of the console, controller, a Super Mario Bros. cartridge, and a CRTV. The TV is the most impressive piece here, as you get to build World 1-1 from Super Mario Bros. A tiny crank on the side of the TV moves Mario across the stage. It's quite the inventive set all around and would be the perfect gift for the old-school Nintendo fan in your life. Check out our Lego NES review for more details. 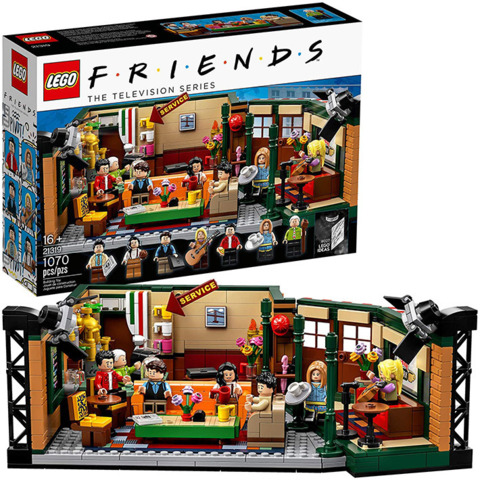 No one told you life was going to be this way, but even if your life's a joke and you're broke, you can find plenty of joy with the cast of Friends and their iconic Central Perk hangout. All the regulars are here, including mini-figs of Joey, Rachel, Ross, Monica, Chandler, and Phoebe. This set even breaks the fourth wall, as once you're done building Central Perk, you can arrange the lights and cameras to reenact some of your favorite Friends scenes. 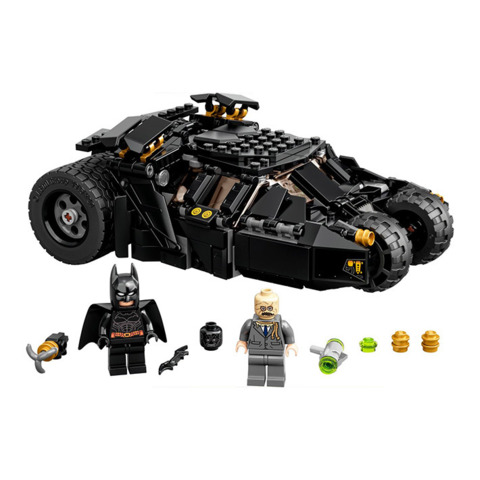 Does it come in black? You can bet that Batman's signature crime-fighting ride does with this Lego tribute to the Nolan trilogy of caped crusader films. Featuring a chunky tank-like design, 422 pieces, and a working cockpit, this set also throws mini-figures of Batman and the nefarious Scarecrow into the mix. 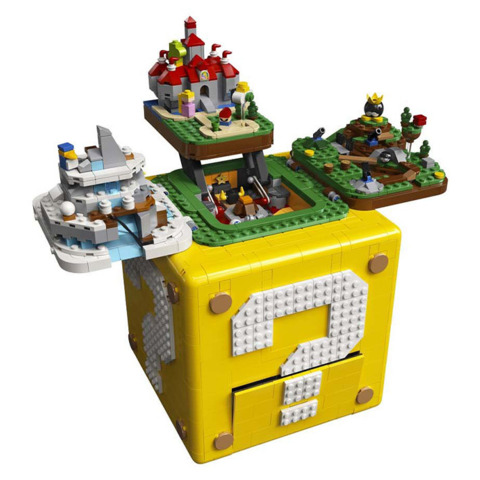 For years, fans have pondered what really lies inside the many question mark blocks within the world of Super Mario. This year finally provided an answer: Lego! The Super Mario 64 Question Block is a bright and classic collectible that's not just a ton of fun to build, but also houses hidden levels and several surprises. It's also compatible with the Lego Super Mario courses released in 2020, for even more interactive fun, plus it look magnificent once it sits on your desk. Just don't bash it.

See at the Lego Store 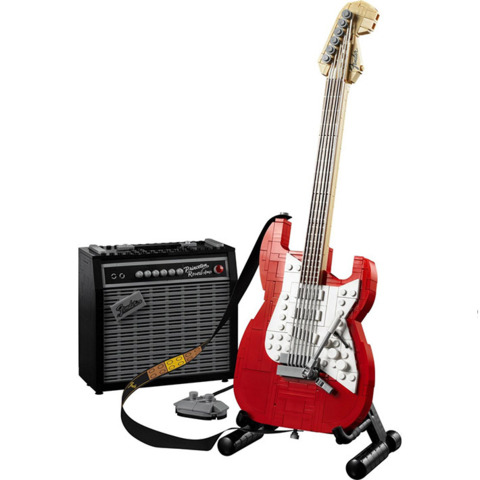 If you've ever wanted to own one of Fender's signature Stratocaster guitars, Lego will allow you to do so while also experiencing the thrill of building the musical instrument. While you won't be shredding any legendary solos on it--don't make us tap the "No Stairway to Heaven" sign please--you can still have a blast arranging over 1,000 blocks into an instrument of mass distraction, as well as its amp and a spare guitar body.

See on the Lego Store 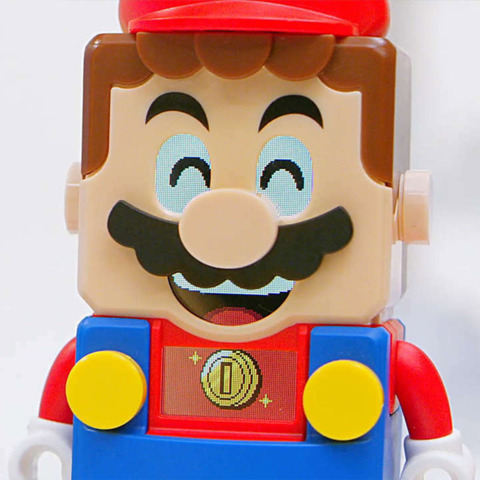 The Lego Super Mario line lets youngsters create their own courses using Mario-themed bricks, enemies, power-ups, and more. The Adventures with Mario Starter Course is where you want to start here, but there are 10 expansions available to purchase separately to make the possibilities endless. Lego Mario himself has sound effects, and both his eyes and chest are interactive, changing their look depending on what's happening on the course. Keep in mind that building and playing requires an app that can be downloaded on iOS or Android devices. 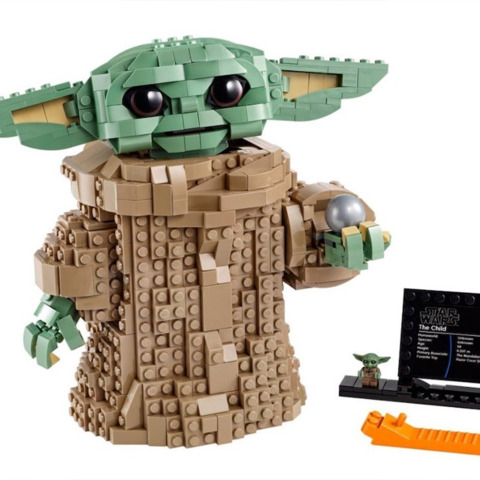 Coming as a surprise to absolutely no one, Lego has recreated Baby Yoda as a 7.5-inch Lego statue. Despite his obviously blocky look, Lego Baby Yoda still looks quite cute. His head, ears, and mouth can move to make different poses, and he carries the control knob from the Razor Crest in his left hand. The 1,073-piece set also comes with a tiny Baby Yoda figurine and an information card. 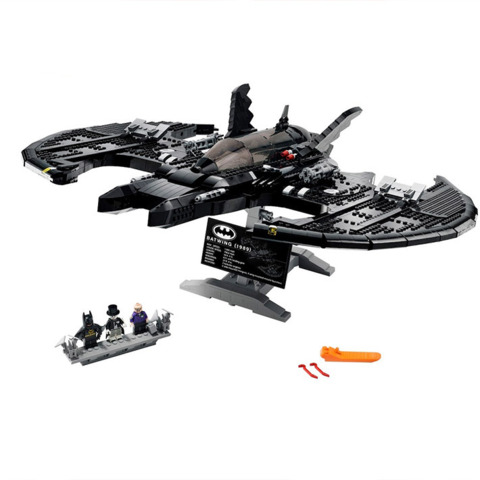 Hailing from the 1989 movie starring Michael Keaton, the Batwing is one of the most detailed Lego builds to date. The 2,363-piece set recreates Batman's awesome flying vehicle to near-perfection. The set comes with three figures: Batman, The Joker, and a Boombox goon. The Batwing can be displayed using the included stand, or you can mount it to your wall.

Also based on its look in Tim Burton's Batman film, the Batmobile kit is an equally impressive build meant for older Lego fans. It's a 3,306-piece build that comes in at 23 inches long--so it definitely takes up a good bit of space. The set comes with Batman, The Joker, and Vicki Vale minifigures. Though a great display piece, the Batmobile also has a cockpit that opens and two hidden machine guns that pop up. The Batmobile comes with a rotating display stand, too. 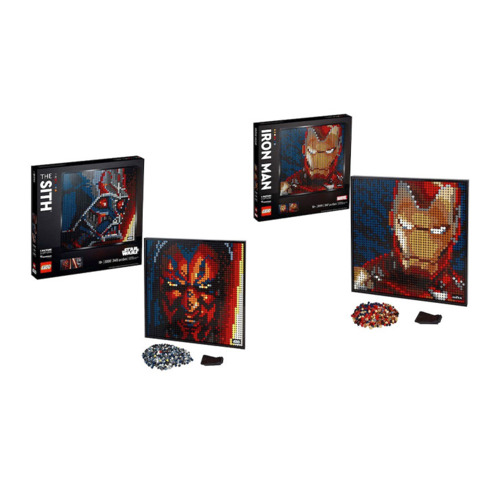 Quite possibly the most "sophisticated" series Lego has made, Lego Art could feasibly hang in a gallery and not seem out of place. There are several Lego Art kits to choose from, including Iron Man and Star Wars, and each one has a dizzying level of detail. The Iron Man set is 3,167 pieces and can be built to create three unique looks. Meanwhile, the Star Wars set is 3,395 pieces and can be built to form one of three Sith Lords: Darth Vader, Kylo Ren, or Darth Maul. Buying three of the same set makes it possible to build one huge portrait of Iron Man or Darth Vader. 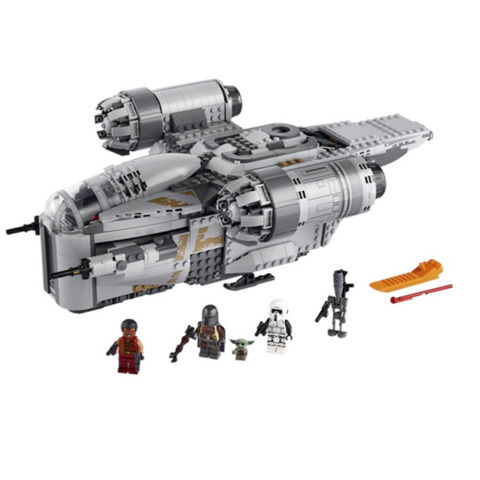 Build Mando's ship from The Mandalorian with this large-scale 1,023-piece kit. The Razor Crest includes a cockpit that opens and closes, spring-loaded shooters, detachable escape pod, ramps, and a cargo hold. It's great for both display and play and comes with five figures: Mando, Greef Karga, IG-11, Scout Trooper, and an itty-bitty Baby Yoda. 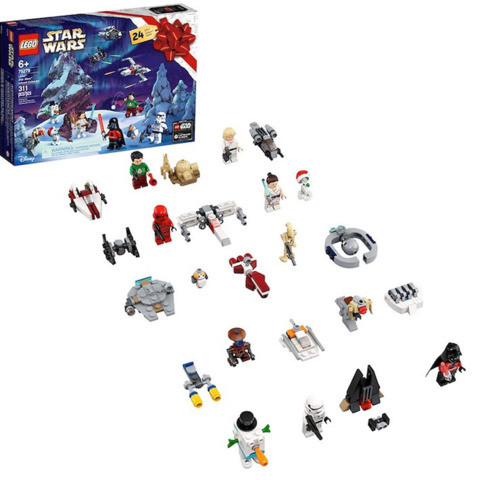 For the Star Wars fan in your life, this Advent calendar is a very fitting Christmas gift. It comes with six Lego minifigures, six Lego figures, and 12 small-scale builds. It's best to give an Advent calendar early so they can open a new little gift every day in December leading up to Christmas. 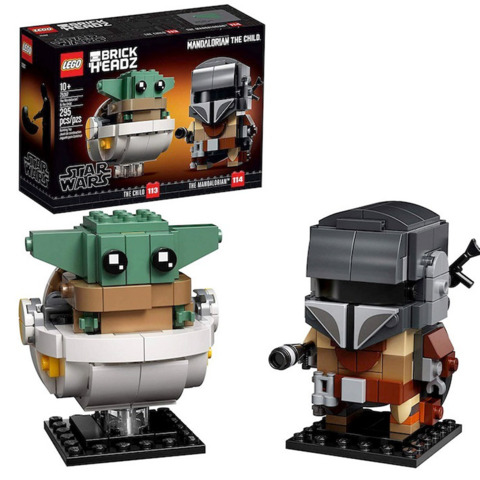 This Lego Brickheadz set comes with two chunky figures hailing from The Mandalorian: the inseparable duo of Mando and The Child. Baby Yoda is in his floating bassinet, while Mando means all business. While they aren't large figures, they are more in-depth than they look at a combined 295 pieces. 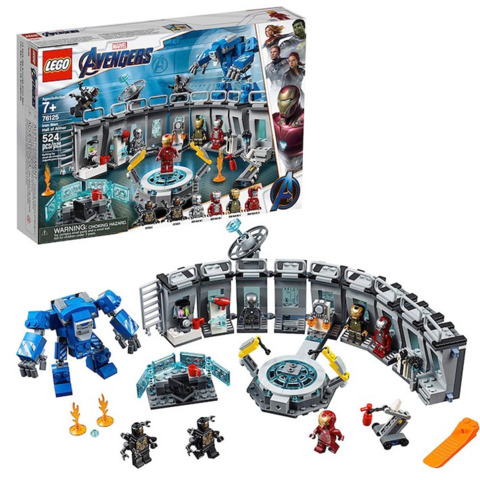 For Iron Man fans, this is a really cool kit. You get to build Tony Stark's Hall of Armor featuring his suits and gadgets. The 524-piece set comes with four Iron Man minifigures: Iron Man MK 1, MK 5, MK 41, MK 50. You also get two Outrider figures and an Igor Suit mech.

Lego Minecraft The Creeper Mine 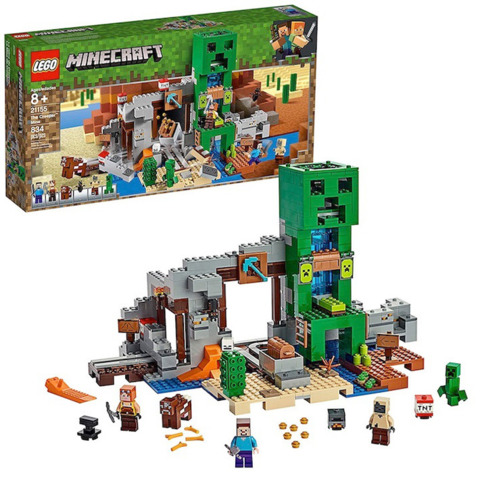 Minecraft and Lego really are a perfect match, and this large-scale build is easily the coolest set revolving around the mega-popular Microsoft game. The 834-piece Creeper Mine build comes with minifigures of Steve, blacksmith, and a husk. You also get Creeper, bat, and cow figures to round out the set. The star of the show is the giant Creeper mine though, which looks great as a display piece, too. 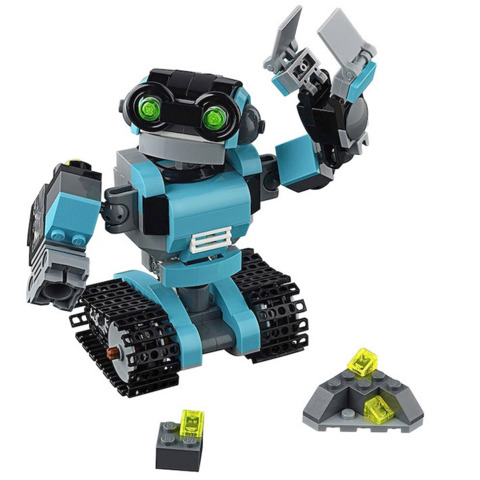 This awesome Lego Creator kit can be built into three different models: a regular robot, robot dog, or robot bird. The 205-piece set is recommended for kids ages 7 and up. 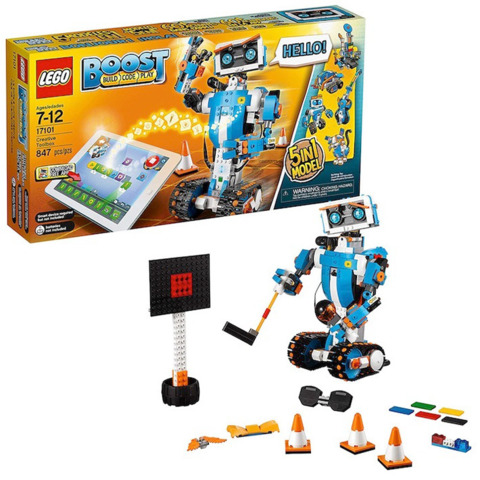 The Lego Boost Creative Toolbox is a STEM-focused building kit that is dedicated to teaching kids aged 7-12 the basics of coding. After building Vernon the Robot, you can use the downloadable application (compatible with iOS, Android, and Windows) to program commands for Vernon. You can teach him how to dance, play guitar, and explore. There are a myriad of exercises included that make this kit worthwhile for kids who show an interest in robotics. 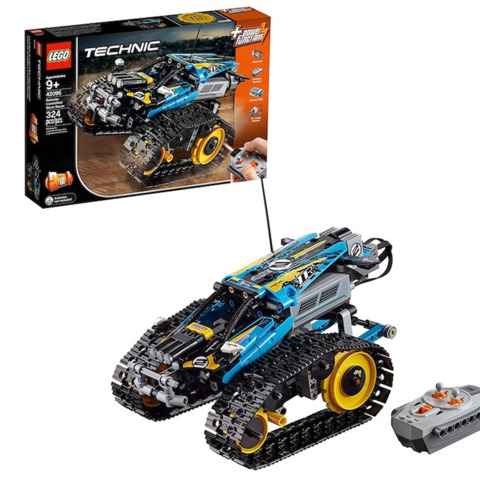 Remote-control cars are cool--remote-controlled Lego cars are even cooler. Part of the Technic series, the Stunt Racer remote-controlled vehicle is a 324-piece kit that can be built into two different vehicles, each of which can perform wheelies and fast spins. 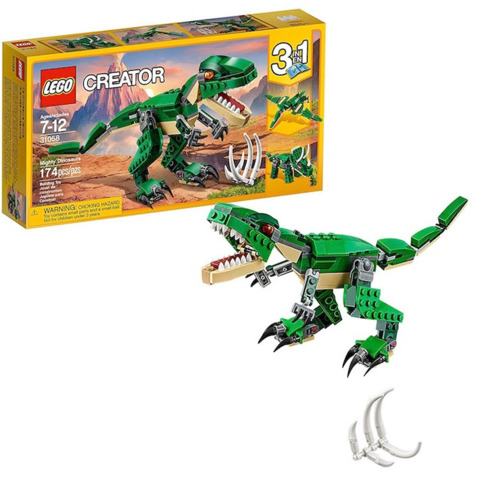 For the dinosaur fanatic in your life, this little set can be built into three different notable types of dinosaurs: the T-Rex, Triceratops, or Pterodactyl. It's a smaller scale set at 174 pieces, which makes it ideal for younger kids. 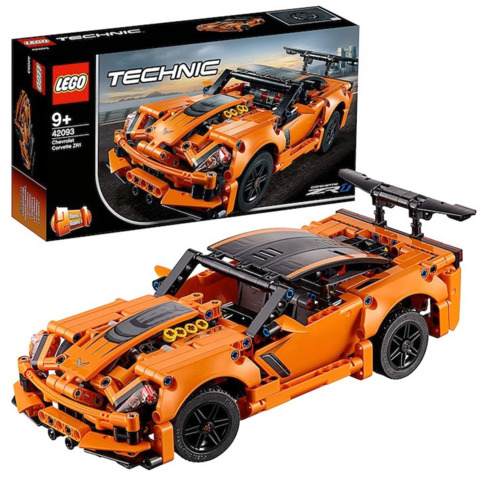 At 579 pieces, the Lego Technic Chevy Corvette is an in-depth build that will interest the gearhead in your life. In addition to building a slick orange corvette, you can also build a classic Hot Rod with this kit. 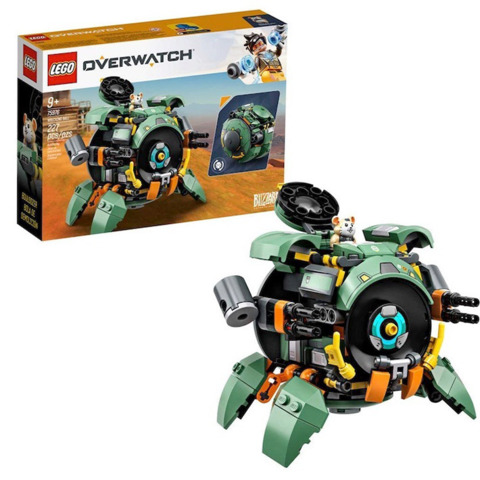 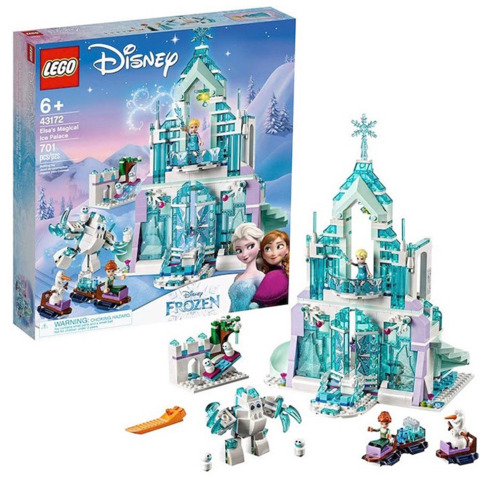 The Frozen series is easily one of the most popular modern animation franchises, so there's a good chance you have a kid on your list who still belts out "Let it Go" (much to your delight, we're sure). This 701-piece kit lets Frozen fans build Elsa's ice palace. It comes with Elsa and Anna mini-dolls as well as Olaf, Marshmallow, and four Snowgie minifigures. 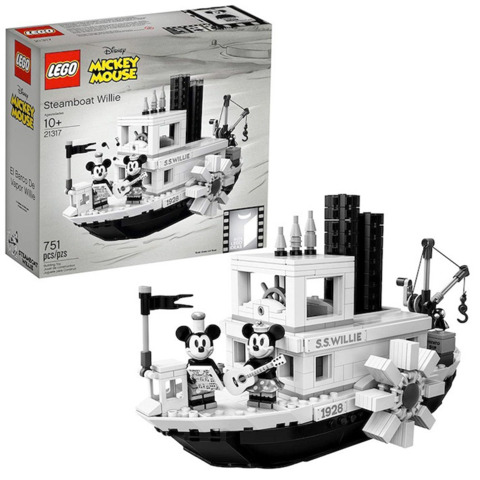 Big Disney fans, especially those who fancy themselves as something of a Disney historian, will get a kick out of this gorgeous Stemboat Willie building kit. Designed with a black and white aesthetic, the scene hails from the 1928 cartoon. At 751 pieces, this set has a nice attention to detail and comes with adorable Mickey and Minnie figures. 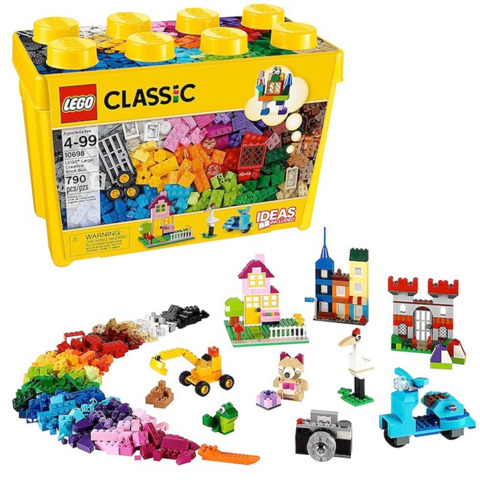 While Lego kits with designed builds are the most popular nowadays, sometimes it's nice to just go back to the basics. This literal box of bricks comes with 790 bricks spread across 33 different types. Kids can construct a myriad of unique designs, with the only limit being their imagination.