Shopping for a Fortnite fan this holiday? We have you covered with 20-plus Fortnite gift ideas that are sure to be hits.

In just a short span of time, Fortnite has become a cultural phenomenon and a core part of the gaming landscape. Arriving four years ago, the Epic Games-developed battle royale remains as popular as ever and chances are high that your household has a fan or two of the franchise. More than just a game, Fortnite has capitalized on its success and ventured into the world of merchandising. Branded clothing is available at a wide number of stores, action figures of the most popular characters can be found in toy aisles, and even comic book shops have graphic novels featuring the Marvel and DC universes colliding with the world of Fortnite.

There are plenty of Fortnite gifts that are sure to make fans happy this holiday season, such as in-game currency, Funko Pops and gaming chairs which you can read about in our Fortnite gift guide.

For more gift ideas, take a look at our holiday gift guide hub, where you'll find roundups dedicated to Nintendo, PlayStation, Xbox, and much more. On the entertainment front, we have gift guides focused on popular franchises such as Marvel and Star Wars as well as anime. 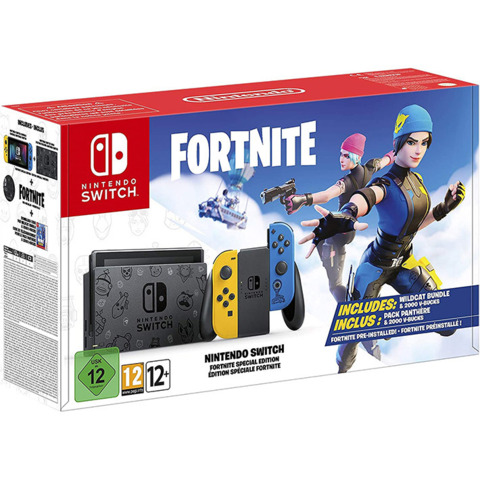 Originally released in Europe in October, the Nintendo Switch Fortnite Wildcat Bundle just arrived in the US on Cyber Monday. The console has Fortnite-themed Joy-Con as well as a specially designed back panel and dock. Inside the box you'll also find codes to unlock three outfits, three Back Blings, and 2,000 V-Bucks. 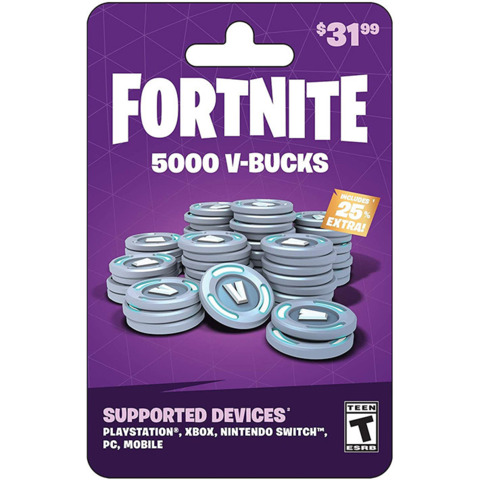 The easiest and best Fortnite gift you can buy is in-game currency. Fortnite V-Bucks can be spent on Battle Passes and cosmetics. Anyone who is a dedicated Fortnite player has probably spent some cash on the free-to-play game. V-Bucks are compatible with every platform, so you can't go wrong here. 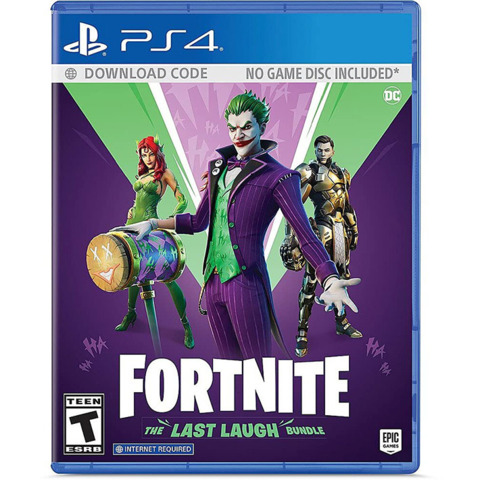 As Fortnite is free-to-play, it may seem odd that there are retail editions of the game, but they serve a purpose for dedicated fans. Fortnite: The Last Laugh is the latest bundle, and it releases November 17 for all major consoles. Though you get a standard game box, it doesn't come with a disc. Instead, it includes a code that unlocks 1,000 V-Bucks and a bundle of in-game Joker-themed cosmetics, including an outfit back bling, multiple harvesting tools, and much more. Fortnite fans who love Batman will certainly appreciate this bundle. 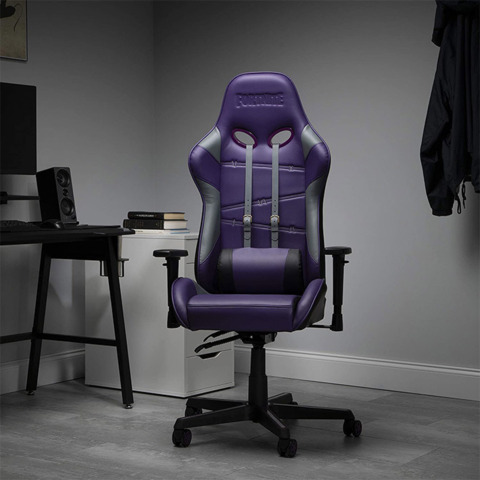 With people spending more time at home, there's never been a better time to invest in a quality gaming chair. For Fortnite fans, Respawn has created an ergonomically designed gaming chair with a slick purple and gray color scheme and Fortnite logo imprinted on the headrest. It has an adjustable lumbar pillow, can recline up to 130 degrees, and fully swivels. This is an ideal gift for those who spend a lot of time at their desk either gaming or working. 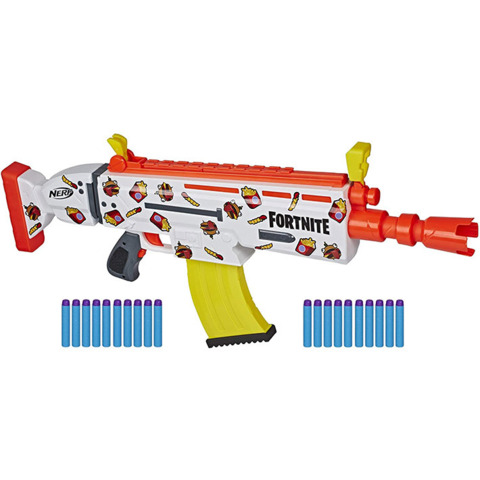 Nerf has released a number of dart guns based on weapons in Fortnite, including the Sp-R, which comes with a trio of Loot Llama targets to aim at. There's also the AR-Durrr, a dart gun with Durrr Burger iconography that rapidly shoots 10 darts thanks to its motorized design. 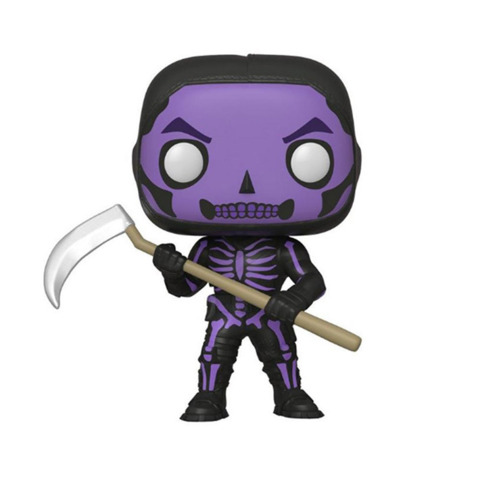 Exclusive to GameStop, the purple variant Skull Trooper Funko Pop looks both menacing and cool. The Skull Trooper skin was first featured in Fortnite's debut season, so it's been a staple ever since. 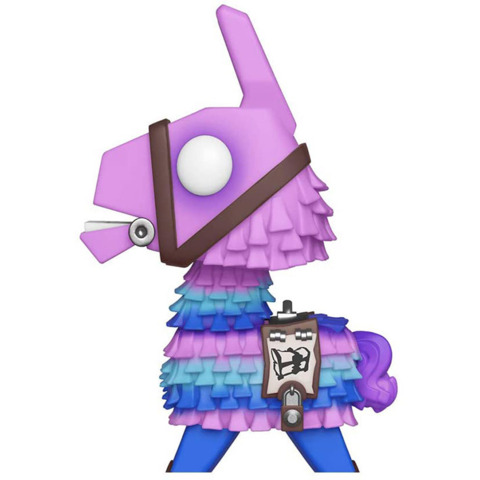 Nothing says Fortnite more than the Loot Llama, which makes this Pop figure the most iconic in Fortnite's growing lineup of vinyl figures. Instantly recognizable and well-designed, the Loot Llama Funko Pop is a safe gift idea for any fans of Fortnite. It would also make for a great stocking stuffer. 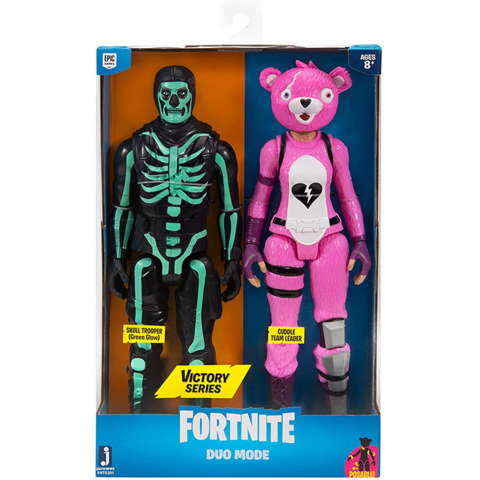 At 12 inches tall, Fortnite Victory Series figures are more like conventional action figures. They are articulated, so you can pose them in different positions. 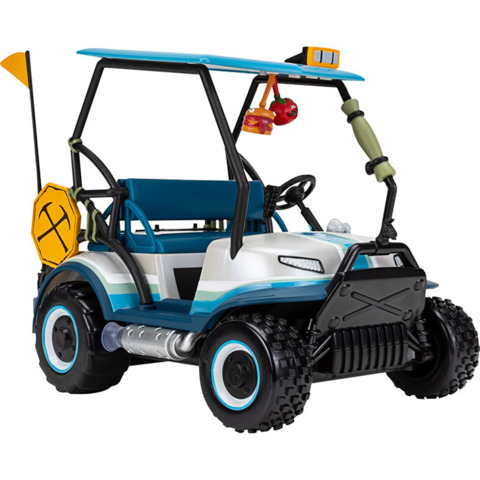 This Fortnite ATK vehicle has sound effects and built-in LED lights. The rubberized wheels help it roll across any surface, and it also comes with a Drift figure and multiple accessories. 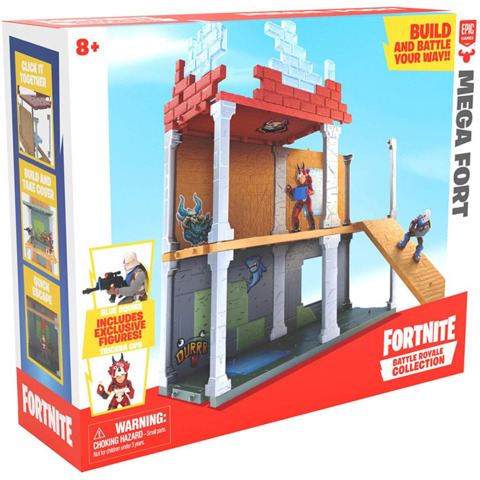 Similar to the Builder Set, this Mega Fort Set lets kids build makeshift structures and battle it out with the included Blue Squire and Tricera Ops action figures. The set comes with 28 pieces to build your fort. You can either create it from the ground floor yourself or follow the directions to construct one of the three included designs. 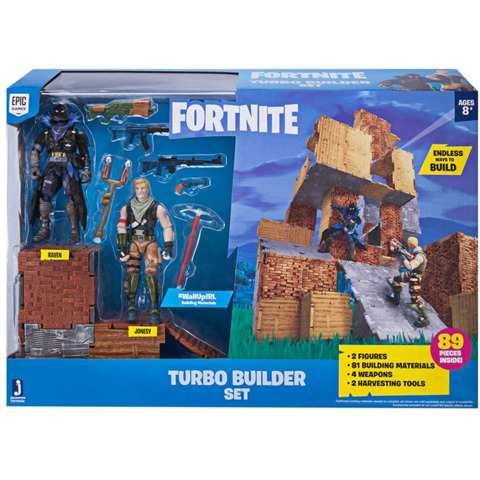 The Turbo Builder Set comes with 81 materials (27 of each), which means it has the most versatility out of all of these types of Fortnite toy sets. It comes with Jonesy and Raven 4-inch action figures, each of which is fully articulated. Inside the box, you'll also find a pair of harvesting tools and four guns. 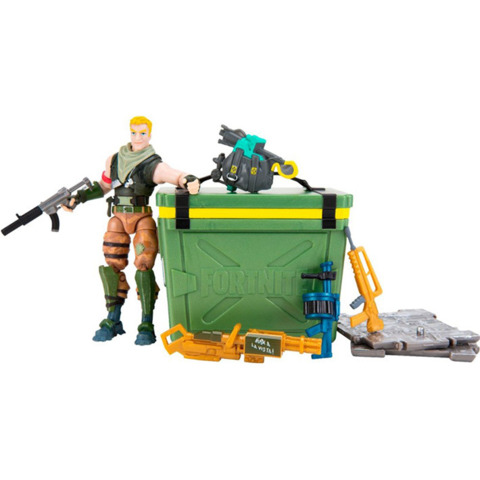 These Loot Battle Boxes would be an ideal stocking stuffer for Fortnite fans. The randomized containers come with tiny toy weapons, building materials, and back blings that can be used with Fortnite action figures. 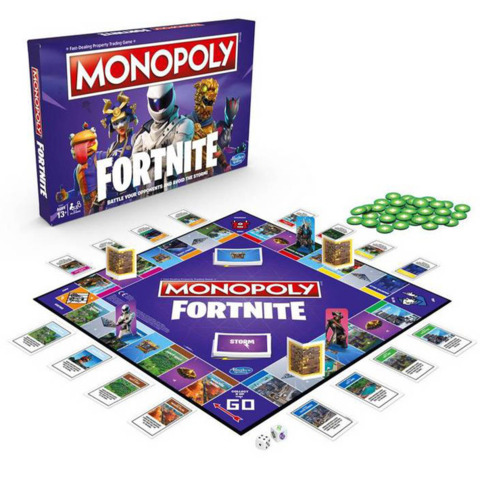 Every popular franchise needs its own version of Monopoly, so of course, this is Fortnite's very own edition of the classic board game. It's a great gift if you're looking to play something with the whole family. 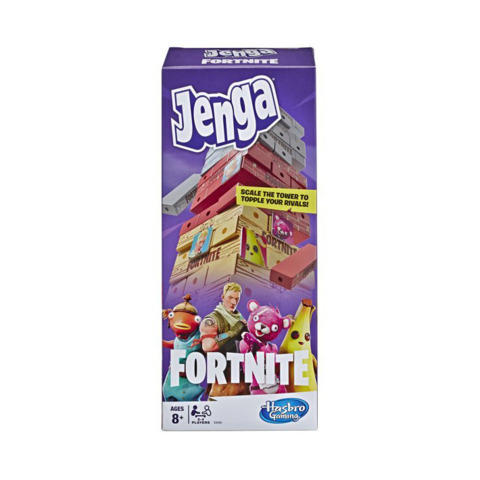 Jenga: Fortnite Edition is very similar to the recently released Super Mario Jenga featured in our Nintendo Switch gift guide. The blocks have the look of Fortnite's three building materials. Each turn, players use a spinner to determine how many blocks they must remove/add, and how many levels their player token gets to climb--first player to the top wins. 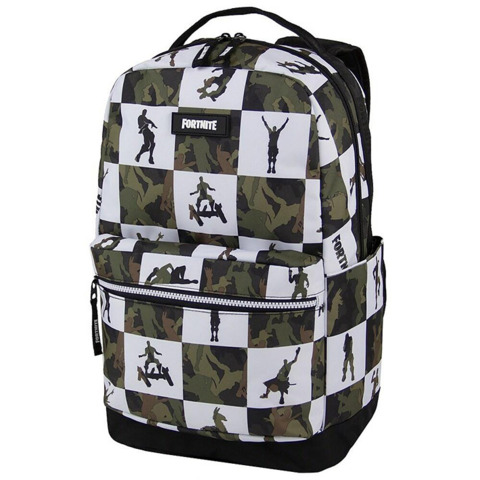 Depending on where you live, school backpacks may not be getting a ton of use right about now. But at some point things will get back to normal, and your kids will inevitably ask you for a cool new backpack. Thankfully, these Fortnite backpacks are fairly cheap and good quality. There are four different color schemes to choose from, each with different emotes, logos, and graphics. 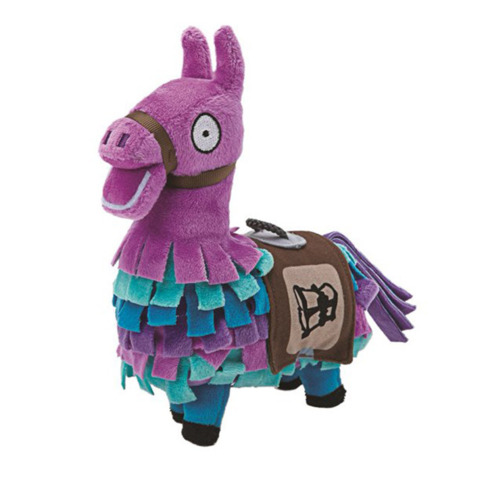 If you're looking to buy a Fortnite plush toy, the Loot Llama plush is softer than a Funko Pop and a perfect way to cuddle up with the Fortnite llama during the holidays. 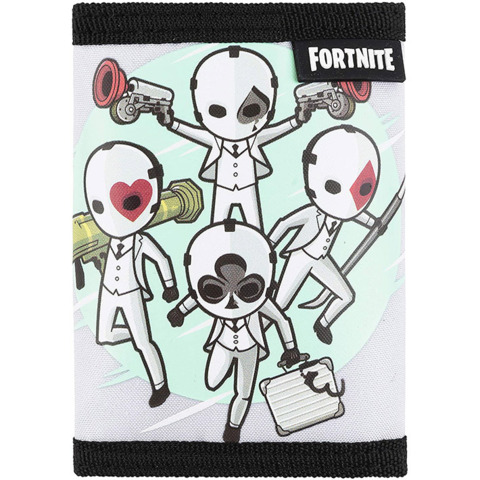 For the youngster in your life who needs a wallet to store allowance money, these Fortnite tri-fold wallets are sure to be a hit. There are four different designs to choose from, including two that feature the iconic Loot Llama. 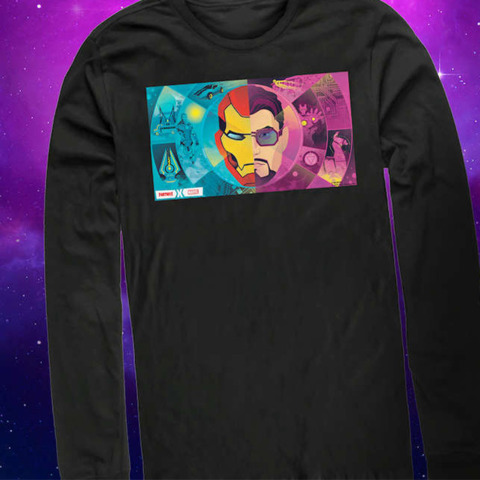 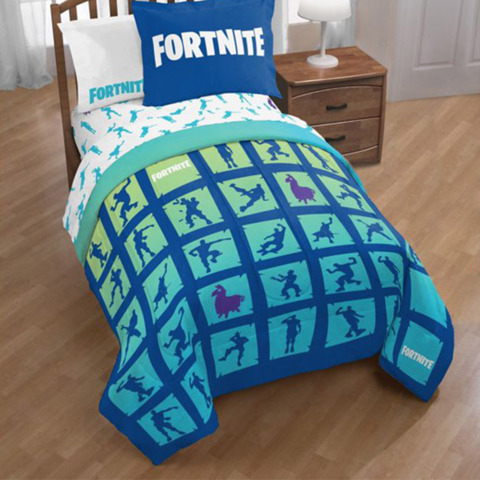 For the young Fortnite fan in your life who perhaps hates bedtime, this comforter and pillow sham set might help change that. The twin-sized comforter is reversible and features Fortnite dance poses, the Loot Llama, and more. The matching pillow sham is blue and simply features the game's title. 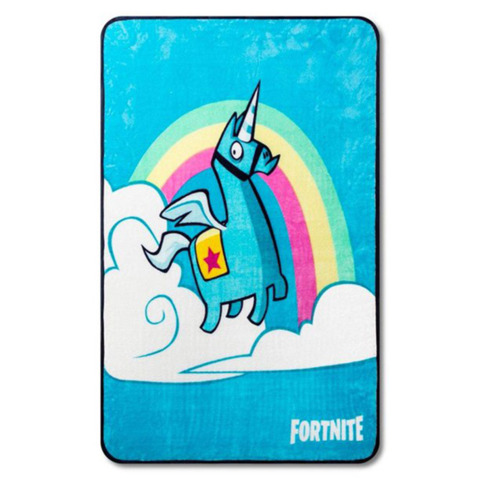 This soft throw blanket will have Fortnite fans counting Llamacorns (llama + unicorn) when drifting off to sleep. It features the Loot Llama as a unicorn skipping across a cloud with a rainbow in the background. The blanket is 46 x 60 inches and made of 100% polyester. 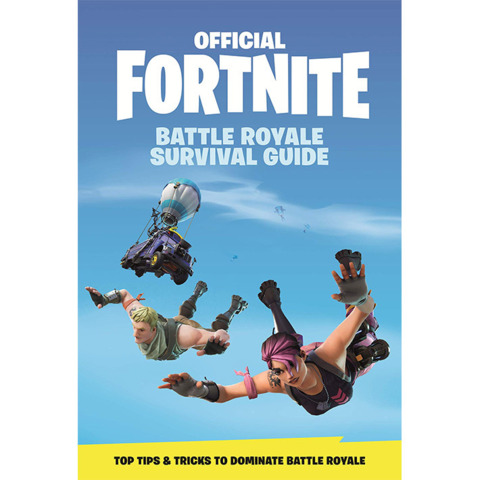 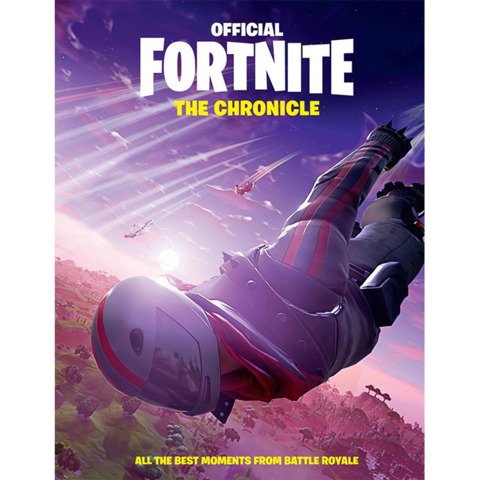 Though Fortnite is a multiplayer game without an overarching narrative to speak of, it's still told a story in its three-plus years of existence. Fortnite: The Chronicle takes players through all of the changes to the map and the big events that beefed up the lore of the game up through Season 9. It'd be a neat gift for those interested in how Fortnite has evolved over the years.

Fortnite: How to Draw 2 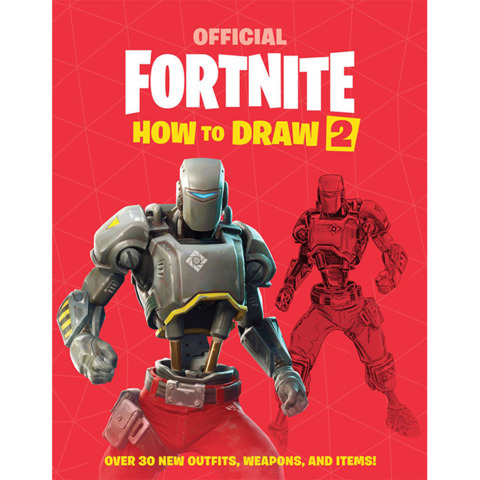 For the artistic Fortnite fan on your list, this guide book has detailed visual instructions that teach players how to draw more than 30 characters, gliders, weapons, and more.