We activate our Omnitrix in our look at this kid-friendly game for Wii and PSP.

Little boys love toys and few kids have a cooler gadget than Ben Tennyson, star of the Cartoon Networks' Ben 10. Ben Tennyson is also the hero of the upcoming Wii and PSP action game, Ben 10: Protector of the Earth. We got a first look at this kid-friendly game at a recent pre-E3 press event held by Ben 10 publisher D3, and it's easy to see how this game is going to appeal to fans of the cartoon.

If you've never seen Ben 10 before, the story follows Ben Tennyson--along with his grandfather and cousin--as well as his mysterious Ominitrix, a watchlike device that grants Ben the ability to transform into a number of different alien forms, each with its own special powers. If that sounds to you like ripe pickings for a video game, well, you'd be exactly right. The various forms that Ben can transform into, thanks to the Omnitrix, give him a number of ways to take out the many foes that he will encounter along the way. For example, Fourarms is a big brute with--you guessed it, four arms--who is good at close combat. Fireblast's heat powers are ideal for ranged blast attacks and also grant him the ability to briefly surf in the air (similar to the X-Men's Iceman). Other forms include XLR8, a superfast speedster; Cannonball, who can roll up into an impenetrable ball and roll over enemies; and Wildvine, a plantlike form that can stretch its limbs to extreme lengths or throw out explosive seeds.

Ben 10 is at its heart an action game built for kids, so the attack moves in the game are quick and easy. There are three types of attacks: light, heavy, and special moves, which are unique for each character. For example, Heatblast's special move is a tornado attack that can cause damage for any surrounding enemies. Fourarms' tombstone punch is especially cool; after punching the ground and causing chunks of rock to stick up like tombstones, Fourarms grabs one of his foes then hurls it into the exposed rock.

On the Wii version, you move the Wii Remote horizontally for a light attack, vertically for a heavy attack, and move the Nunchuk to execute a special move. There's also an alternate, Nunchuk-less control scheme that ties the A button to light attacks and the B button to heavy attacks. To execute a special move, you can flick the Wii Remote down. Of course, you can combo these various attacks into chains to pile on the damage. The PlayStation 2 version of the game ties the different kinds of attacks to the face buttons on the PS2 controller. All told, the game will have 98 different attack combos across all the different characters into which you can transform.

Though the game is focused on the action, there will be some light puzzle elements. The form that Ben takes will often be determined by the problem he faces in the game's more than 14 levels. You might require Fourarms' strength to break through a tough barrier, or you might leap to a ledge you couldn't otherwise gain access to by using Fireblast's sky-surfing ability. As you move through the game, defeating enemies, you'll collect various pickups that will amplify Ben's powers and let him stay in alien form for longer stretches of time.

In the game, you'll guide Ben through his adventures as he travels with his family on a summer vacation that will include such locales as the Grand Canyon, San Francisco, Seattle, and near Mt. Rushmore. And while Ben's incredible powers make him formidable when transformed, he can only stay in one form for so long before he has to transform back to his normal human form. Using special powers drains the Omnitrix's energy quickly, so you'll only want to use it at the right moments. When Ben is in human form, he can still attack, but he's significantly weaker and more vulnerable to attack.

Ben 10: Protector of the Earth is clearly aimed at a younger audience, but its action-packed charm certainly wasn't lost on us. Fans of the series will likely love taking on Ben and his amazing powers; there might even be enough fun for grown-ups to also join in the fun, thanks to the two-player cooperative play featured in the game. The game is due for release later this year. 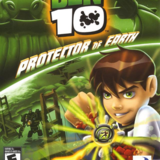