Madness, mayhem, and money all come together in this high-concept action title from across the Atlantic

Lately there have been several titles released trying to recapture some of the gaming goodness that Bullfrog's Syndicate offered. First with Origin's Crusader, and then with Domark's Total Mayhem, players entered the familiar three-quarter perspective world and set to blowing up everything in side with hideously overpowered weaponry. Although these games borrowed heavily from Syndicate, they stepped away from Bullfrog's formula by decreasing the number of combatants under the players control, and decreasing the amount of the playing field the player could see at any given time. These subtle changes moved the focus of both games from strategy to action, creating an entirely new play experience. Now, UK based Mirage is moving that emphasis back in their newest title Bedlam. By combining an easy to use interface and a strange new storyline with the same economic stresses and destructive action that made Syndicate so popular, Mirage hopes to create a title that will pull players in by the score.

The story takes place on a futuristic Earth that is being destroyed by out-of-control droids called BioMechs. The player takes on the role of a Spacer, a race that has spent their entire lives in zero-gravity space stations. Now that the Earth has been brought to its knees by the vicious BioMech onslaught, the Spacers have made a deal to protect the harried planet in exchange for precious salvage. Starting with three combat droids, the player must work through 25 missions in five different zones (and the wasteland that links them) to save the Earth a bring untold riches to his spacebound people.

Play controls are pleasingly simple, with player using a left click of the mouse to move their robot to a location, and a right click to fire their active weapon. Armament available includes Needler Cannons, grenades, flame bombs, and a super destructive explosive called the Nuke. The biomechanical enemies are just as varied, ranging from the intelligent and stealthy Demon to suicidal Bomb Frog. In each mission, the player will have a different objective that will sometimes require subtle strategy and sometimes require brute force. Unlike many linear strategy games, players can tackle the zones in any order they see fit, a feature that eliminates some of the frustration of being stuck on a particular level.

What promises to be the greatest strength of Bedlam is its multi-player support. Mirage is currently planning two modes: cooperative and deathmatch. In the cooperative mode, players will band together, with only one robot to control apiece. Up to twelve player will be able to participate in a game, and although score will be kept individually, each player will be working towards the mission objectives and goals. The deathmatch option up to twelve players will enter a mission level teeming with BioMechs and attempt to remain the last one standing. Since killed players are beamed back to their starting point, games are played for a set amount of time; the player with the most human kills earning the victory.

Although Bedlam has some tough competition on computer store shelves, its combination of proven gameplay with slick new graphics and two network options give it enough firepower to take on the strongest comers. If you're tired of waiting for a true sequel for Syndicate, this could be the game that will satisfy that urge to destroy. 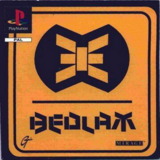