Last month, listings for Beautiful Katamari began appearing on retailer databases. First it was spotted for the Xbox 360, and then for the PlayStation 3 and the Wii. Today Namco Bandai confirmed that the game is indeed on the way to the Xbox 360 and the PS3, but the Wii version of the game was conspicuous by its absence.

When it arrives on Sony's and Microsoft's platforms, Beautiful Katamari will feature high-definition graphics (720p resolution), a new soundtrack, and online multiplayer action. The game will also expand with downloadable content, and Namco Bandai is promising updates "long after the game has launched."

As in the original 2004 Katamari Damacy for the PlayStation 2, the King of All Cosmos has accidentally botched up the universe, and it is up to the diminutive Prince to set things right by pushing a ball around a number of environments. As the ball rolls over objects, it picks up anything significantly smaller than itself, thus adding to its size and allowing it to pick up even more.

Beautiful Katamari is expected to arrive in stores later this year. 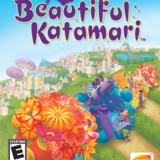