It has been a busy year for EA DICE. In addition to the first console installment in its defining Battlefield franchise, the Swedish developer has pushed out the door (or perhaps window) Mirror's Edge, a parkour-inspired first-person action adventure game. On top of all that, DICE had also planned to inaugurate EA's new Play 4 Free label with the launch of Battlefield Heroes, an online shooter with a cartoonish, Team Fortress-like aesthetic supported by microtransactions.

EA had initially planned on launching DICE's shooter this summer, but the publisher had to settle for a closed beta in May with the promise of the full version by year's end. However, that will not be the case. In an update to the Battlefield Heroes official Web site this week, DICE senior producer James Salt said that not only would the game's closed beta be taken offline as of November 14, but it wouldn't be opening back up until early next year.

"We have received lots of great feedback from our beta testers," said Salt. "So much so that we are now ready to enter our next phase. On Friday evening (6 p.m. CET) we will be closing down the current closed beta and moving our focus to polishing the backend."

Salt went into a bit more detail on what that means for the game. "You know the old saying about icebergs being 10 percent above water, and 90 percent below," he said. "Heroes is a little like that. There's the 10 percent game part you can see, and the hiding 90 percent is what we call the backend. The backend does a lot of things. From running the website's features and looking after the items you have, to collecting the results from each Heroes game and matchmaking players into games."

This week's announcement runs slightly counter to sentiments expressed by DICE executive producer Ben Cousins in August. At that time, Cousins told GameSpot that as far as DICE was concerned, "We've already released the game."

"We're ramping it up slowly over time, and if you're a hardcore gamer and a fan of Battlefield, you will absolutely be in the closed beta at some point," said Cousins. "We'll be opening that up very wide in the next few months, so there will be plenty of opportunities to play the game. Then the release that makes sense to [EA executives] would be when we start selling items and release restrictions of access, and that would be toward the start of next year."

For more on Battlefront Heroes, check out GameSpot's previous coverage. 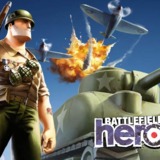