Coming from the same team behind the Aliens vs. Predator and the Sniper Elite series, Rebellion's Strange Brigade focuses on overcoming unique challenges and trials in the vein of a pulpy 1930s action-adventure film. With four-player co-op in mind, you're tasked with facing off against hordes of ghouls, mummies, and other supernatural beings as your expedition ventures deeper into ancient ruins and lost lands. Set for release on August 28 for PC, PS4, and Xbox One, we spent some time going hands-on with the game's offerings, which goes beyond the standard story campaign.

In the video above, we dive into a co-op session with Rebellion's head of creative Tim Jones, who helps break down what to expect with Strange Brigade. In the main campaign, your squad of explorers will use their particular skill-sets--including specific weapon loadouts and special powers--to discover the origins of the supernatural threat, while also collecting the lost treasures hidden within the ruins. In similar style to co-op oriented action games like Left 4 Dead, you'll have to work together to make it through dangerous traps and waves of monsters.

Along with the main campaign are several side-activities and challenges in the form of the Score Attack and Horde modes. In Score Attack, your squad will have to clear through smaller stages as quickly as possible before the time runs out--all the while racking up score multipliers and taking out as many enemies as possible. As is tradition, the Horde mode has your team face off against waves of monsters in levels filled with environmental hazards and other dangers. After the end of each wave, you can turn in cash for new weapons, upgrades, and the unlocking of new areas on the map. But as you branch out further into the level, more enemies will come flooding in, requiring far more coordination within the team.

Strange Brigade looks to be a fun send up of the classic adventure serials, which promised dramatic action and exotic locales to explore. The developers at Rebellion also have plans in store for the game after its release, which will also come packed in with the game's season pass. Along with a set of new weapons and costumes for existing squad throughout the several content updates, additional characters, weapons and a bonus campaign will also become available sometime post-launch.

For more info on Strange Brigade--releasing August 28 for PC, PS4, and Xbox One--be sure to check back in with GameSpot for more info. 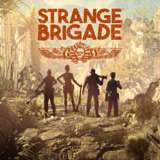