A new Batman: The Animated Series documentary digs deep into the classic cartoon.

Will there ever be a better comic book TV show than Batman: The Animated Series? Given how tough it would be to top, probably not. In many ways, it was the thing that best-defined Batman in the 1990s. Whether it was Kevin Conroy's voice as Batman, the Gotham City it created, or the adventures it sent the caped crusader on.

Of course, there's another aspect of Batman: The Animated Series that was near perfection and that's its villains. From the introduction of Harley Quinn to having Mark Hamill voice The Joker, Batman: TAS's bad guys were second to none.

Now that the show has arrived on Blu-ray, fans are getting the chance to get to know the baddies a bit more. In The Heart of Batman, a new feature-length documentary included with the Blu-ray set, the cast and crew of the show speak in-depth about a number of topics. One that's particularly interesting, though, is the villains.

In the exclusive video above, the show's creative team says what makes the baddies on Batman: TAS so special is that you can relate to them. "They found a humanness in the villains," voice director Andrea Romano said. "They found a 'why' and they let us know the 'why.'"

And when the episodes came to a close, they didn't always leave a smile on your face. "In our show, we were able to end something without necessarily a happy ending," director and character designer Dan Riba explained. "The villain gets his comeuppance. But because we related to the character and we felt sorry for him, it's a tragedy."

It's hard to imagine another animated series--or comic book TV or movie, for that matter--that has treated its villains the same way. Then again. that's a big part of what makes Batman: The Animated Series so special.

The Batman: The Animated Series Deluxe Limited Edition Blu-ray is available now. The set contains all 109 episodes of the series--both Batman: TAS and The New Batman Adventures--as well as the animated films Batman: Mask of the Phantasm and Batman & Mr. Freeze: Sub Zero. Besides the documentary, the special features also include a number of featurettes and episode commentaries. 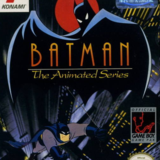