Batman: Return to Arkham has been listed by the Italian arm of video game retailer GameStop. The listing states the title will feature the first two game's in Rocksteady's series, along with all DLC for both.

Although neither developer Rocksteady nor publisher Warner Bros. Interactive Entertainment have officially announced a Batman: Arkham Collection, this is the third instance of it being listed by a retailer, giving further credibility to its existence.

On April 18, a GameStop employee leaked images of an unannounced "Batman HD Collection." The collection was also mentioned prior to this, on March 23. These also stated the package would include the first two games with all the DLC.

Both games in the series will also reportedly have "updated visuals" that have been "optimized" for PS4 and Xbox One, according to the leaks.

The latest Batman console game was Batman: Arkham Knight, which came out in June 2015 and has reportedly sold 5 million copies. It was also developed by Rocksteady, and is apparently the last Batman game the UK studio plans to make for the foreseeable future. 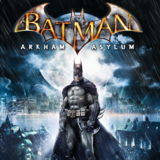