We get some playtime with the single-player mode and put the bear and bird through some of the crazy challenges in Nuts & Bolts.

The team at Microsoft-owned Rare has been working away, keeping their heads down in recent times and churning out the well-received follow-up to Viva Pinata, Trouble in Paradise, as well as a pint-sized version for the DS, Viva Pinata: Pocket Paradise. Rare also revealed that it was resurrecting one of its most beloved franchises, Banjo-Kazooie, after a long hiatus since its Nintendo 64 days. The original Banjo-Kazooie and Banjo-Tooie both garnered critical acclaim, including GameSpot editors' choice awards, so the team has had a lot to live up to.

We've already looked at multiplayer and the vehicle creator and decided it was high time we had a decent session with the single-player campaign. Thankfully Microsoft invited us out to its UK headquarters in Reading, just outside of London, to get in some quality hands-on time with Banjo and his friends.

The game starts off with a brief history of the series, and in typical Banjo humour, it appears that the now portly duo of Banjo and Kazooie are content living a peaceful life of excessive eating, and not a lot more, under Spiral Mountain. However, after eight long years--in both the game's timeline and the real world--Grunthilda is back to prove once and for all who the ruler of Spiral Mountain is. After a few moments of bickering, a strange Pong-faced (his face resembles the classic Pong screen) individual appears, called the Lord of Games, or LOG. He seems to be responsible for making every game that has ever been sold--including, as Kazooie points out, low-selling titles such as Grabbed by the Ghoulies.

To settle their little debate, the godlike LOG has created a gameworld for Banjo, Kazooie, and Grunty to prove their worth in, with the winner earning the rights to Spiral Mountain. We then jumped straight into a challenge against Grunty to collect the most jiggies. We essentially ran up a path collecting jiggies in a straight line. After a few moments, LOG realised that players' expectations have changed over the years and that such a simple challenge simply would not do. He instead transfered the gang to a created gameworld to test their limits. Banjo had to collect jiggies once again, with Grunty and her minions doing all in their power to stop him.

Showdown Town, a quaint little town complete with fat and furry villagers, acts as the game's hub from where you access the other worlds. You unlock these worlds--referred to as game globes--throughout the game as you collect jiggies. Once you earn jiggies you'll need to retrieve them from jigg-o-vend machines scattered throughout Showdown Town, usually located near the entrance to the relevant game globe. Using a shopping cart LOB has graciously provided, you then need to ferry the jiggies to the Jiggybank--a large glass sphere in the centre of town--to access new globes from LOG's video game factory, perched on the top of a hill high above the town. Kazooie has lost all of his powers from the previous games, but LOG gives him a magical wrench that you can use to lift items and jiggies into your shopping cart and to move misplaced vehicles.

We've seen the LOG-manufactured green hills of Nutty Acres before, but this time we were free to explore them at leisure. Everything has a slightly manufactured feel to it, with trees bolted together from green metal, flower stems made from springs, and a digitally produced sky that all make it feel like a scene from The Truman Show. After enjoying the crisp, colourful game globe for a few moments we headed towards the direction of the first jiggy indicated on the onscreen map and talked to one of Grunty's former stooges, Klungo, to get it started. It seems he's had enough of taking orders from Grunty and has gone solo. He's now running an acorn farm in Nutty Acres, but it seems a fire is raging up at the farm and he needs Banjo to take a look before the challenge's time runs out and his crop is destroyed. Choosing a prebuilt Mumbo Motors vehicle, we raced up to the farm and discovered that Mumbo had decided to have a barbeque and had burnt some of his sausages. Crisis averted.

After heading back to Klungo we were rewarded with a jigsaw-pieced jiggie and set off back to the game's hubworld, Showdown Town. Once we had deposited the jiggie into the Jiggybank, Banjo-Kazooie regular Humba Wumba appeared and gave us the blueprints to unlock some new vehicles from Mumbo's garage. Heading back to Nutty Acres, we attempted another challenge, called Tick, Tick, Boom. It seemed Grunty had dropped a ticking bomb on Mumbo. Thankfully we were bestowed with a new vehicle to help with this mission, LOG's tractor, to get the bomb to Bottles, who could then defuse it.

After earning a few jiggies we unlocked the second game globe, Logbox 720. In typical Banjo humour, LOG has designed his own console (which looks strangely similar to Microsoft's console), and you'll need to get inside it to pass a few challenges. The innards look like something out of Tron, with silicon circuit boards, glowing cables, and even giant game discs from previous Rare titles spinning around. Among the challenges we needed to complete were helping a fat pig called Pikelet, Showdown Town's chief police officer, stop a firewall from burning through the console; helping Klungo fix the console's dodgy connection to the Interwebby; and turning down the ambient brightness in the console to help Bottles complete maintenance so it could run at a blistering 1,000 gigaflaps.

Banjo-Kazooie is shaping up nicely, both visually and in its gameplay. The quirky design that has gone into some of the crazy gameworld looks promising, and fans of the series will be relieved to know that many of their beloved characters will be making starring or cameo appearances this time around. We're keen to play around more with Mumbo's vehicle editor and test out our creations in multiplayer matches--an equally solid experience in addition to the single-player mode--at a later date.

For more on Nuts & Bolts read our just-published vehicle-creator Q&A with Rare and our previous coverage. 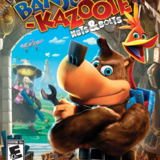