The game is being developed by Milestone s.r.l., which promises "an intense and incredibly deep racing experience with more than 100 bikes from the world’s most popular manufacturers, along with a diverse selection of circuits that range from city, country, and historic tracks from the world of motorcycling."

Players will be able to compete in four different racing categories: Superbikes, Supersports, Naked, and Historical Bikes. You'll also be able to customize your vehicle and rider.

“With Ride, Milestone has captured the quintessential motorcycle racing experience, with a huge selection of bikes, tracks and customization,” Senior Vice President of Sales and Marketing at Bandai Namco Chris Gilbert said. “With so much content, coupled with true-to-life racing simulation, motorcycle fans will finally have the next-gen racer they've been waiting for, and gamers of all stripes can experience the adrenaline rush of the redline.”

Milestone has experience in developing racing games and motorcycle racing games in particular, having made MotoGP 14, WRC 4 World Rally Championship, and others. 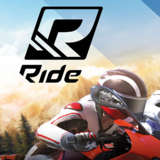