According to the latest issue of Famitsu, Bandai is currently making a new Xbox 360 mech game titled Zegapain XOR for a summer release in Japan. The game is being developed by Cavia, best known as the studio that worked on Square Enix's Drakengard series. Cavia is also working on two other Xbox 360 titles: an action game titled Bullet Witch, and a role-playing game named Cry On, which is being produced by Hironobu Sakaguchi's Mistwalker.

Zegapain is a sci-fi game in which mankind is fighting for survival against enemy beings called the Gars-orm. The player takes the role of ace pilot Toga Victor, who is resurrected after being killed in battle. To fight against the powerful Gars-orm, Toga pilots the mech Zegapain.

The Zegapain uses various weapons to take on the Gars-orm, such as a lightsaber and a rifle, and it can also adapt to different situations by trading its parts. The player will fight against the Gars-orm in various locations such as outer space, the mountains, and destroyed cities, as well as "virtual experiment spaces" that have been created by the Gars-orm.

Details on Zegapain XOR's game system haven't been disclosed yet, but Famitsu reports that it is a "robot action shooting game." Bandai is taking a mixed-media approach to the project and is launching a Zegapain anime series on April 6. The show will air on the TV Tokyo network every Thursday. 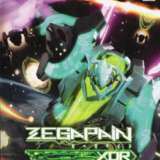