This kid-friendly basketball game for the Game Boy Advance should be popular with young children.

Backyard Basketball for Game Boy Advance is the first time that the family-friendly series has made it onto Nintendo's portable game system. In Backyard Basketball, you'll play with up to 30 backyard kids and 10 kid versions of NBA stars in 3-on-3 arcade-style gameplay. The kid-friendly graphics and gameplay are geared toward young gamers not yet ready for the intensity, edgy content, and fast pace of the more grown-up basketball games.

In Backyard Basketball, realism takes a backseat to fun, so you'll be able to use crazy power-ups, such as super speed, in order to zip down the court, and the super slam dunk, which allows your player to fly high into the air.

Appearing in the game are some of the NBA's biggest stars, both literally and figuratively: Tim Duncan, Tracy McGrady, Shaquille O'Neal, Kevin Garnett, Dirk Nowitzki, Vince Carter, Ray Allen, Paul Pierce, Yao Ming, and LeBron James. The game will also feature logos and colors from all 30 NBA teams. In addition, there will also be plenty of unlockable content, including new courts, accessories, and players.

The action takes place on a variety of cool courts, including the beach, the playground, or the street. You can play a quick game or a single match, but there will also be season play, and you'll be able to track your player and team stats. You can also create your own team by picking from any of the players. Backyard Basketball will support head-to-head play over a Game Link. The game is being developed by Humongous, and it is expected to ship in October, just in time for the new NBA season. 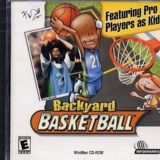