Backyard Baseball ships for the PS2

Atari and Major League Baseball today announced that the PlayStation 2 version of Backyard Baseball has shipped to stores in North America. Developed by Humongous Entertainment, the game lets players compete with kid-sized versions of pro players, such as the game's cover athlete, Alex Rodriguez. A PC version of the game, titled Backyard Baseball 2005, is currently scheduled for release in June. 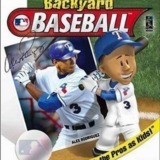