We get a first look at Mama's next minigame compilation.

Mama certainly does get around. The hero of domestication has already tackled cooking and gardening with flourish, but now she's going after the very thing that christened her "mama" to begin with: babies. Don't worry, this isn't a simulation on giving birth. Instead, it's about babysitting a newborn. Players have to watch a baby from when it first wakes up in the morning all the way until it closes its eyes at the end of the night--and the many hours in between. This minigame collection looks to follow in the footsteps of its forebearers, giving players a number of realistic and goofy situations in which to compete.

The most important aspect of this Wii game isn't located on the disc; rather, it's the special item that's also packed in the box. Every copy of Babysitting Mama comes with a life-sized, plush doll of a baby. You stick the Wii Remote into its back and then you have a motion-sensing, crying baby to call your own. For kids who may not understand that real-life babies hate to be shaken, the game warns players at boot up that babies, both in and out of the game, should be handled with care. The design for the packed-in baby is not yet finalized, but it doesn't look particularly realistic, going for a silly, big-eyed aesthetic now.

The first minigame we saw involved waking the baby up for the day. Here, you hold the baby (with remote tucked firmly in its back) and sway and move it to wake it up. Onscreen arrows indicate the direction you need to move, and you're rewarded for moving in time with the right amount of force. There are also grooming games, such as diaper changing and hair washing, though we didn't get a chance to see those in action. Instead, we saw a lighthearted activity that tired out an overactive baby. Mama invited another baby over to her house to have it compete in a race with her own. This was controlled with the nunchuk, with power-ups to nab and obstacles to avoid to get to the finish line first. Who says mama doesn't have a sense of humor? As long as she isn't gambling on the outcome, it's all good.

There are six different babies to choose from, each with a unique look and a different set of activities. Babysitting Mama is currently scheduled for release this winter. And don't worry that the packed-in baby will bump the price sky high. Even with the plush doll, this is $40. 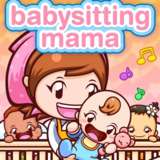