NCSoft announces that the title will be shut down at the end of this summer; current subscriber accounts will be "reconciled."

Postapocalyptic massively multiplayer online driving game Auto Assault will be racing its last race on August 31. The online PC title, developed by NetDevil and published by NCSoft, was released slightly over a year ago in April 2006.

Gamers chose to join one of three factions--the humans, mutants, or biomeks--and play inside in a futuristic armed-to-the-teeth car, with a unique combat system to match. For more information on the game, read GameSpot's full review.

A notice on the game's official Web site stated the company's policy toward current subscribers. "As of today, any player currently in the service with an active billed account will not be billed again. If players have previously purchased time via multi-month billing or time cards that extends their service past July 31, NCsoft will reconcile these accounts appropriately."

The game will close at midnight on August 31. No reason was given as to why the game is being shut down, but it was hardly a success story. In Auto Assault's first full quarter of availability, NCsoft's financial report showed that the game--along with South Korean tennis game Smash Star--accounted for less than one-third of 1 percent of the company's sales.

NCsoft representatives had not returned calls to comment as of press time. However, a statement read that further announcements regarding the closure would be coming soon. 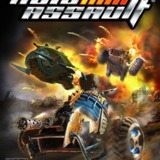