Raise your survival chances by grouping up.

Upcoming action game Attack on Titan will have a multiplayer mode for up to four people to play together, publisher Koei Tecmo revealed today.

The game's Scout Mode will allow players to recruit up to three companions online to venture outside the wall together with. Teams will start at a camp, where they will be able to upgrade gear, change costumes, and prepare resources for fights.

The group leader will be able select what mission the team will attempt, with settings spanning across locations such as the Forest of Giant Trees, the Ruined Town, and the Stohess District--the latter of which being the area where the female titan caused the most destruction in the manga/anime series.

Attack on Titan will be released on August 30 for PS4 and Xbox One, and digitally for PlayStation 3, PlayStation Vita, and PC (via Steam). The game will also feature upgrades to all titan-slaying gear, with the omni-directional mobility gear, blades, and scabbard all upgradeable with materials gathered from slain Titans. These materials can be gathered from killing Titans on both singleplayer and multiplayer missions.

The game is based on the first season of the popular Attack on Titan anime (which is based off the manga, of the same name) and is developed by Omega Force, which is perhaps is known for its work on the Dynasty Warriors series. The studio has also released numerous spin-offs based on third-party licenses for popular anime, such as One Piece: Pirate Warriors. You can watch the recently-revealed opening cinematic for the PS4 version here. 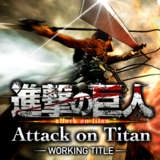