The online Xbox game will not come out this year.

While Atlus still plans to release the title in the future, the development of the game has been frozen for now, due to the high costs of developing an online game. Atlus explained that the game's delay anticipates the company's upcoming structural reorganization, details of which will be revealed in July.

Atlus still plans to enter the online gaming market, but it hopes to find a better method of dealing with the risks, and it may work together with its parent company, Takara. 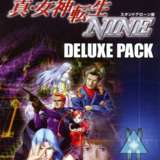