Your turn, and mine.

[UPDATE: While our impressions of the game haven't changed, we now have some actual gameplay, which you can check out in the video below. This article was originally published on September 4.]

I once played a game of chess in which I and my opponent moved our pieces at the same time. Once I grabbed my bishop, and she touched her queen, our decisions were locked in, and we had to live with the consequences. Atlas Reactor reminds me of that particular chess game.

Since its founding in 2006, Trion Worlds has made a name for itself as a creator of MMORPGs, with Trove, End of Nations, and Rift all iterating on the genre in one way or another. But with Atlas Reactor, Trion is branching into turn-based strategy, with a gameplay innovation of its own--although players can plan their attack and defense strategies, the turns themselves happen at the same time.

This gameplay conceit may sound trivial, but it produces a vast array of possibilities on the battlefield. It makes you consider not just your plan, but the plan of your enemy as well. Each action could result in dire consequences, or triumphant success. It's as much of a mind game as it is a strategy title.

My first encounter with Atlas Reactor taught me this the hard way. I approached it like I might a game of XCOM, in which I can see the enemy's move before my own. But in this game, players attack before moving, and not the other way around. So I set out under prior assumptions, only to find them rendered useless. I thought my longterm plan would work, as I moved my gunslinger character into cover in preparation for a long-range shot, with a health power-up nearby for my subsequent escape.

But an enemy foresaw this decision, and aimed a missile right in the vicinity of my destination. I could only watch as the rocket careened into the square next to me, while my teammates performed attacks of their own on unwitting recipients.

This process plays out over a course of three phases. Executive producer Peter Ju and his team call them the Prep, Dash, and Blast phases. Prep consists of laying mines and enacting character buffs. Dash is a chance for characters to escape to safety before attacks commence. And the Blast phase is self-explanatory: this is when the action starts.

Character abilities show how much action points they'll require, and also which phase they'll occur during. Herein lies half the strategy of Atlas Reactor: knowing when certain characters, like the robotic dog Pip, have already used a Dash ability. Or knowing where Zuki's delayed missile attack will land during the next turn. Ju even saw a sniper make an amazing guess as to where a character was evading to, and pulled off a miraculous finishing shot when that character landed right in the bullet's path during the last phase. This is the kind of game where you'll rarely see the same battle play out twice. Especially considering the variety of ways to tweak gameplay.

Ju and his team are stressing customization when it comes to Atlas Reactor's game modes. It's only in alpha right now, but Ju said they plan on implementing new options for tinkering with maps, rulesets, and team builds. There's even a timer to speed up turns and encourage snap decisions. I myself am hoping to see a one-life elimination round in the future, as the potential gameplay that might arise from that tension is tantalizing.

Atlas Reactor is already a fine-tuned tactical game. But with its character-based abilities and unique turn system, it makes me think about strategy and my opponent in a different light. Like chess, it will definitely require practice. And like chess, there are a plethora of methods that could fall apart, or succeed with flying colors, in only a moment's notice. 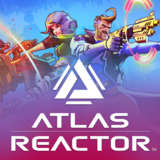