We take a first look at a localized build of the upcoming 2D role-playing game, Atelier Iris 3: Grand Phantasm.

Fans of 2D role-playing games will be happy to know that Gust's Atelier Iris trilogy is almost complete. This May, Nippon Ichi software will release Atelier Iris 3: Grand Phantasm for the PlayStation 2, and we recently took the opportunity to play a localized build of the game to see what has changed from the previous game in the series.

Grand Phantasm begins by offering a bit of background about a book of infinite wisdom known as the Wizard's Librim of Escalario. This book was divided into eight pieces, which were scattered all over the world. According to the legend, whoever can find and assemble all of the pieces of the book will have all of his or her wishes come true. Of course, it looks like it will be up to you as a young adventurer to unravel the secrets of this "book of hidden truths."

You start off with a party of two characters--a somber guy with a massive sword and spiky red hair named Edge and a chipper female alchemist named Iris. The two adventurers appear in a forest where they find a treasure in a chest. After nabbing the loot, they try to leave but are suddenly surrounded by half a dozen red blobs known as punies. The two have no choice but to fight their way out of the forest, and this is where we got our first taste of combat in the game.

The battle system in Grand Phantasm will be instantly familiar to anyone who played the previous Atelier Iris games. When you're out walking about towns or forests, you have an isometric view of your character and the surroundings, but when you enter battle, the perspective switches to a side view, with the enemy on the left and your party on the right. Characters take turns based on initiative, so the quicker characters invariably end up going first, and there's a meter at the top of the screen to indicate the order of turns. When it's your turn to act, you can choose an action from a radial menu that appears over your character's head. You can perform a normal attack, use skills, or consume items such as herbs. Although it's a turn-based system, the battles move quickly, especially early in the game when enemies are relatively weak. The two characters in our party were fairly well balanced, with the tough Edge dishing out a lot of damage while Iris stood in the back offering support and occasionally zapping enemies with magic from her staff.

After the first battle, the two characters suddenly appeared at a glowing portal in the forest. Apparently, they were in an area that kicks people out after a certain amount of time. The characters decided to head to the nearby town to report back to their guild about the quest they just completed. At this point, we were free to explore the large town a little bit, finding treasure chests and sacks of loot here and there, chatting it up with the townsfolk, and yes, even walking up to barrels and shouting "barrel!" for no good reason. Eventually we made our way to the raiders' guild at the center of town. This is an area where adventurers can get quests to help out people in town. Looking at the bulletin board, there was only one quest to take, which involved finding a special staff for a scholarly gentleman in the scriptures library. The quest system seems well arranged, and you have a notebook to keep track of all of your current quests. The notebook is frequently updated with details about each quest, so it seems like it will be a valuable tool for figuring out where to go next.

The quest system is a bit new and different, but everything else about Atelier Iris 3 is very familiar. Much of the backgrounds and assets have been recycled from the previous game, so the whole world has a very similar look. You'll see many of the same sprites and background objects from the previous two games, and although most of the characters are brand new, they still have the colorfully cutesy, anime-inspired look that the series is known for. In addition to the visual style, we also heard the English voice-over in the game. Not all of the dialogue is voice, but a good portion of it is, at least in the early part of the game. The voice acting sounds good from what we heard, but there's no word on whether or not the original Japanese voice track will also be available.

If you've finished Atelier Iris and Atelier Iris 2 and you're looking for some more lighthearted classic-style role-playing, your wait is almost over. Nippon Ichi Software America will be releasing Atelier Iris 3: Grand Phantasm this May exclusively for the PlayStation 2. Be sure to check back often as we bring you more details about the game. 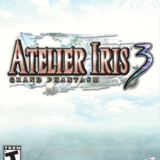