Publisher says patch to The Temple of Elemental Evil, to fix bugs and tune rules, is in the works.

Atari announced today that The Temple of Elemental Evil, released just two weeks ago, is getting an upgrade.

The publisher plans to release a patch for the game sometime in October.

The patch will, according to Atari, "address a number of issues associated with the retail release of the product, including technical fixes and general fine-tuning; a variety of quest clarifications; corrections for some race and class inconsistencies, such as miscalculated attack modifiers and incorrect weapon and spell use; as well as a number of interface updates." 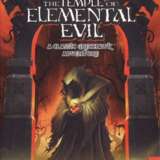