1982's Atari 2600 game Haunted House is making comeback. Atari announced today that a new version of the game is available now for iOS devices through iTunes. You can download the game right now.

Atari has resurrected Haunted House as a free-to-play endless runner. As the story goes, you play a boy lost in a scary house who must find his way home by running and jumping. You'll also need to trigger springs and build bridges to stop the advances of the monsters that pursue you. Along the way you'll unlock new levels and obtain new power-ups, Atari says.

The new Haunted House for iOS devices was developed by Kung Fu Factory, the studio behind a host of mobile games, including Teenage Mutant Ninja Turtle: Rooftop Run. There's no word yet on an Android version of the new Haunted House.

In the original Haunted House, you played as a pair of eyes, navigating through a haunted mansion. A new, 3D version of the game arrived on Xbox 360, Wii, and PC in 2010, though it wasn't very well-received. 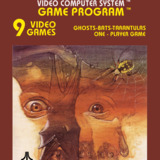