Telltale Games' frighteningly amoral tag team of freelance police are ready to protect and serve (for a reasonable fee) once again. As part of a bevy of announcements, Atari announced this week that it would be bringing the second season of the downloadable, episodic adventure series Sam & Max to stores around the world next year.

Season 2 sees the cuddly yet violent detectives investigate a giant robot attack on their beloved city, perform an exorcism on Santa Claus, and even visit Hell, a heavily bureaucratic limited-liability company. As part of the international release, Sam & Max Season 2 will introduce full French and German translations to the episodes, as well as Spanish and Italian subtitles.

Season 1 of Sam & Max also made it to stores for the Wii and PC, courtesy of Dreamcatcher, The Adventure Company, and JoWood Group. For those who don't insist on a hard copy, all of Telltale's Sam & Max episodes are downloadable for the PC from the developer's Web site and from the GameTap subscription service.

Sam & Max aren't the only cute critter additions to Atari's lineup. According to a report in Variety, the publisher has picked up the just-released Tale of Despereaux games from the recently defunct Brash Entertainment. The Hollywood trade paper claims that Atari has snagged Brash's rights to the PC, PlayStation 2, DS, and Wii editions of the movie adaptation, while leaving the Xbox 360 version on the shelf. 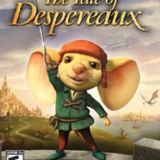 View Comments (16)
The Tale of Despereaux
Sam & Max: Beyond Time and Space