You can invest in the new game, but there are some important matters to be aware of.

Atari wants to bring RollerCoaster Tycoon to the Nintendo Switch, but the way the company is going about it is strange and already leaving some feeling dubious. The company launched a campaign on the equity crowdfunding site StartEngine, which, unlike Kickstarter, allows backers to invest and get a share of the profits in return.

The minimum investment is $250. For that, you'll get a pro rata share of 50 percent of profits up to the point where you make 120% of your original investment. After that, you get 25 percent of profits, but only until 18 months after the game launches. One major caveat is that Atari could cut off profit-sharing if its license to market and sell the game gets terminated early. Additionally, the percentages mentioned above could decrease if the campaign doesn't reach $2 million. So far, the fund has brought in $21,100 from 33 backers.

Also of note is that you do not necessarily get a copy of RollerCoaster Tycoon for Switch for your investment. You need to kick in at least $1,500 to get a copy of the game with your investment; if you invest $750, you can get 25 percent off the street price at launch.

As for the game itself, Atari says it will be one that "takes complete advantage of the console's innovative home and portable capabilities." It will be "made specifically for Switch," so it sounds like this will not be a port of an earlier game. If all goes to plan, RollerCoaster Tycoon for Switch will include multiple scenarios (including those with time limits and other constraints), along with Sandbox and Career modes.

RollerCoaster Tycoon for Switch will be developed by Nvizzio Creations, the Canadian studio behind the free-to-play RollerCoaster Tycoon Touch and the maligned RollerCoaster Tycoon World for PC. Importantly, the new game is not actually in the works as of yet; development will commence "in the months ahead," presumably pending the results of the investment campaign; the funding ends in April.

RollerCoaster Tycoon is one of the most recognizable gaming brands in history, so it makes sense that its license-holder would want to capitalize on that by bringing it to new systems. However, the decision to use equity crowdfunding is coming across as an odd one to some. There are also some potential red flags related to this, including a line on the StartEngine page about "irregular use of proceeds."

From the sound of it, Atari is saying it might spend $10,000 of the crowdfunded investment money on things like payments to individuals at the company or friends and relatives. Money could also be used for travel and entertainment or to pay back company debt. Here is the paragraph in question in full:

"We might incur Irregular Use of Proceeds that may include but are not limited to the following over $10,000: Vendor payments and salary made to one's self, a friend or relative; Any expense labeled 'Administration Expenses' that is not strictly for administrative purposes; Any expense labeled 'Travel and Entertainment'; Any expense that is for the purposes of inter-company debt or back payments."

You can read the full RollerCoaster Tycoon for Switch investment document here.

The new RollerCoaster Tycoon game for Switch is tentatively scheduled to launch later this year, which is another head-scratcher given that the game might not even go into development until late April. We'll report back with more details as they're made available. 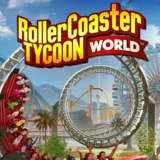