In a new interview, Astro's Playroom developer Team Asobi said that it's next title will be its "biggest to date."

Speaking to GamesIndustry.biz, Team Asobi's creative and studio director Nicolas Doucet said that the team's as-of-yet unnamed project will be a full-blown commercial title, but didn't go into any details about what it might be like apart from that. Though with the team's previous focus on unique hardware features working in tandem with gameplay mechanics, it's likely we'll see something similar with the next project.

The creative director also discussed the pressure of making a title like Astro's Playroom, which will likely be played by anyone who buys a PS5.

"It's very nice to know that whenever a PS5 is bought, Astro is going to get played," said Doucet. "It was a big responsibility, because if you make something that's a little bit without flavor, then you run the risk of making the console feel that way."

Team Asobi was originally a team within Japan Studio, but spun out of it when the latter shut down in 2021. At the time, the studio only had around 35 staff members, but has since grown to more than 60, with Doucet expecting to reach around 100 members in time.

According to Doucet, around 90% of the studio is on the production side of things, but there is a small group of people that work on "touching the technologies of tomorrow, or trying things with the technologies we have today, but taking them into a new direction." The studio wants to have a more dedicated R&D department too, to "potentially start other projects."

Outside of that, despite having recently moved into new offices, most of the team works from home, with the office being used more as a play space to show off what each person has been working on.

GameSpot's Astro's Playroom review gave the game a very favorable 8/10, saying "its surprisingly delightful celebration of PlayStation and its video games is a great way to kick off a console generation." 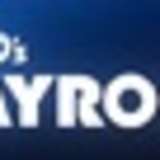