Take to the high seas.

Assassin's Creed: The Rebel Collection is coming to the Switch next week, containing two games--Assassin's Creed IV: Black Flag and Assassin's Creed Rogue. This was confirmed back in September, but now we have pricing and some further details. While Black Flag was also available on the Wii U, this is the first time Rogue has been available on a Nintendo platform. The game is due to release on December 6, and it will cost $40/£40/$80(AUD).

This version will come with all previously released single-player DLC, and includes some Switch-exclusive features. Along with handheld mode, these games have also been updated with HD rumble, a touchscreen interface, and motion control aiming. It should be interesting to see if these elements enhance the experience of playing through these two games again. The Collection will take up 19GB on your Switch, and the games will not be sold separately. Multiplayer has been cut out of Black Flag too, with the game now only supporting one player.

Assassin's Creed came to the Switch for the first time earlier this year with the remastered version of Assassin's Creed III. Assassin's Creed Rogue was originally launched for Xbox 360 and PS3 in 2014, before arriving on PC shortly after. It was released for last-gen systems at the same time that PS4 and Xbox One players received Assassin's Creed Unity, but it eventually came to those systems too in 2018.

In 2014, Ubisoft CEO Yves Guillemot said that Nintendo gamers simply were not interested in Assassin's Creed, and that the series titles released for the Wii U sold poorly. Obviously, things are different with the Switch. Assassin's Creed IV is the standout here--we gave it a 9/10 in our original review, with reviewer Shaun McInnis writing that the game "presents a world full of adventure and opportunity, where treasures scavenged in a remote jungle can be used to turn the tide in a massive naval battle against mighty Spanish warships." 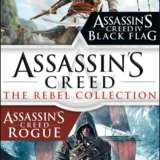