Assassin's Creed: The Americas Collection Won't Ship on PC in the US, Ubisoft Clarifies

Windows version will be available in Europe, Ubisoft clarifies.

Ubisoft has clarified that its new Assassin's Creed bundle will not be released on PC in the US.

A press release sent to European media stated that the collection was also due for release on PC too.

Ubisoft has since clarified to GameSpot that customers in the US will only be able to buy the Xbox 360 or PS3 versions. In Europe, however, a version for PC will also be available.

The Americas Collection will ship in the UK on October 3 and will launch across North America on October 28.

In the UK, The Americas Collection will undergo a slight name revision, called Assassin's Creed Birth of a New World - The American Saga. 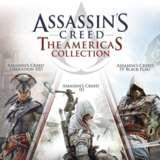