Saints Row: Drive By isn't the only title bailing on the 3DS. As part of an interview with Joystiq, Assassin's Creed: Revelations lead writer Darby McDevitt confirmed that Ubisoft pulled the plug on Assassin's Creed: Lost Legacy, which was announced as part of the 3DS's coming-out party during the 2010 Electronic Entertainment Expo.

Assassin's Creed: Lost Legacy was to follow Ezio as he investigated an ancient castle at Masyaf, a city in modern-day Syria. According to Assassin's Creed lore, the castle served as the traditional home of the Assassin's guild.

According to McDevitt, it's no coincidence that Lost Legacy's plotline bears a striking resemblance to that of Assassin's Creed: Revelations, which will arrive for the Xbox 360, PlayStation 3, and PC this November.

"You may have heard of the game Lost Legacy for the 3DS," he said. "It was announced, but that kind of morphed into [Assassin's Creed: Revelations]." McDevitt did not indicate whether Ubisoft has any future plans for bringing the Assassin's Creed franchise to the 3DS.

Ubisoft had not returned a request for comment on the matter as of press time. For more on Assassin's Creed: Revelations, check out GameSpot's previous coverage. 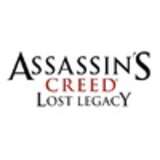