UK's Advertising Standards Authority has clamped down on Midway Games TV ad, which it believes could "encourage and condone" violence.

An ad for action game Stranglehold has been banned in the UK after complaints were considered by the Advertising Standards Authority.

The advertisement shows a shoot-out between four men, and two complaints were received; one viewer believed it glamorised violence, whilst the other was concerned that it was being shown before the "watershed" hour of 9 p.m.

Clearcast, the UK company responsible for prescreening television ads, had deemed that the Stranglehold ad was acceptable to be broadcast after 7:30 p.m. It argued that the violence shown was stylised, unrealistic, and had a fantasy quality. It added that although bullets were constantly flying through the air, no one was hit, and there was no blood or gore shown.

However, the ASA believed that, "the voice-over, which stated, 'Honour is his code. Vengeance is his mission. Violence is his only option,' suggested that it was honourable to seek revenge and that violence was an acceptable solution to a situation."

It concluded that the ad must not be broadcast again in its current form. 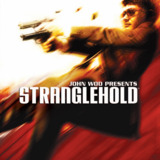