We take another look at this forthcoming RPG that should bring fond memories of Ultima Underworld to fans of the genre.

Arx Fatalis has been a long time in coming. We were supposed to be knickers-deep in Arkane Studios' subterranean first-person role-playing epic last spring, or at the very least doing some serious dungeon delving by the time the fireworks went off on the Fourth of July. That didn't happen, due to an unfortunate mixture of technical issues and the financial troubles of the game's original publisher, Ravensburger Interactive. The RPG glut earlier this year (Morrowind, Might and Magic IX, and Neverwinter Nights made for a busy spring and summer on their own) may have made the delays a blessing in disguise, although a lot of people were understandably agitated over having to postpone their assignation with a game following in the footsteps of the much-beloved Ultima Underworld duo.

But now the wait is almost over. JoWood Productions has cleared up the business end of things by purchasing Ravensburger, and Arkane Studios is doing its part by wrapping up more than two years of hard work on the game in question. The recent release of a nearly feature-complete press beta shows that Arx Fatalis is on track to finally make it into stores at the end of this month. Which is a very good thing, judging from the quality of the beta build. Although the game lacks the cachet of the Ultima Underworld name, it seems to feature everything else that made The Stygian Abyss and its successor, Labyrinth of Worlds, two of the most involving role-playing experiences ever to grace the PC.

Arkane's homage to these classics is most apparent in its story. Much like the first Ultima Underworld game, Arx Fatalis begins with the lead character in a prison. You awaken with no idea of who you are (a cellmate dubs you Am Shaegar, which means something like, "He who has no name"), or what you did to deserve imprisonment in a dank dungeon. All that you're immediately aware of is the history of your world, which is known as Arx. This history is doled out in bits and pieces as the game progresses, although the initial cutscene reveals how the mysterious disappearance of Arx's sun forced the planet's inhabitants to go underground. Facing extinction, the five main races of Arx--human, dwarf, goblin, troll, and ratman--learned to work together. Now, some years later, the old conflicts are beginning to reemerge, and tensions are rising. Dwarves have again realized how much they hate the goblins, ratmen have acknowledged once more that they hate everyone, and trolls have started to grasp the fact that there won't be any bridges underground. Outstripping all this, however, is the evil cult of Akbaa, which plans on resurrecting the god of destruction and ensuring that the sun stays in the witness protection program for good.

The Making of a Backstabber

OK, so you've heard all that before. The anonymous hero thing has been done in role-playing games that run the gamut from Baldur's Gate to Evil Islands. Arx Fatalis might not have an original story, but it does appear to have a lot of other things going for it. The character creation system is free-form, giving players the chance to build the type of protagonist they want without the rigid confines of a class system. After choosing from a limited number of grizzled faces, you are given 16 points to apportion between the four primary attributes of strength, mental, dexterity, and constitution. Each should be self-explanatory for role-playing game veterans, and they can all be taken at face value.

How you adjust these primary attributes has an effect on nine skill categories, which can be further adjusted however you wish with a further 18 points. Filling out these categories allows you to develop just about any type of character you desire, although specializing in certain areas allows you to fashion an archetypal fighter, mage, or thief. If you want a sword-swinging bruiser, you're best to assign points aplenty to the close combat, projectile, and defense skills. Each helps you make the typical tank who can deal out lots of damage at close range and ward off harm with a higher armor-class rating. Budding thieves should favor stealth, technical skill, and intuition. Master these and you'll become adept at backstabbing, hiding in shadows, picking locks, detecting hidden traps and passages, and getting the best deal when trading. The magically inclined will want to focus on ethereal link, object knowledge, and casting. This trio of skills provides access to the 10 spell levels available in the game, along with lore about hostile creatures and artifacts and the ability to make potions and poison for use on weapons.

The game's magic system should be a major draw for RPG fans, as Arkane is handling the mystic arts in a unique fashion. Just like in the Ultima Underworld games, you cast spells using your personal store of mana points in concordance with rune stones found in various locales. Unlike in the Ultima Underworld games, spells can be cast by tracing the runes' shape onscreen with the mouse cursor. In order to cast even a basic healing spell, you need to draw the two runes that power it with a glowing finger. Mess up the pattern and the spell will fizzle. Spells can be precast for instant recall with the click of an onscreen icon, but this can be done with only three different spell types at a time, so you'll have to think about which spells will be needed most urgently in each area that you visit.

The gameplay seems to be heavy on atmosphere. Although combat plays an important part in your adventures in the beta, Arx Fatalis centers more on story and setting than on simply hacking down one horde of monsters after another. Underground corridors sometimes give a nod to the Thief games, as they are often illuminated by a single flickering torch and otherwise cloaked in gloom. Emphasizing this point is the ability to hide in shadows, which automatically pops on if you have enough stealth skill points and the environment is sufficiently shady. This ability works well enough when you're attempting to creep past hostile creatures who are unaware of your presence, but it fails miserably (as it should) if you've previously alerted a foe.

Enemies react smartly to your actions in other ways as well. Attack a friendly member of the king's household staff in the beta build, for example, and the entire castle will turn hostile. Previously cordial guards will attack on sight, as will the kingdom's librarian--a Sister of Edurneum who is half-woman, half-snake and incredibly powerful in the arts of magic, so she does more than attempt to shush you. You don't have to physically attack someone to make an enemy, either. Pick the lock of a chest in front of its owner and you'll soon be on the receiving end of an attack. Openly stealing items provokes the same response, so you have to watch what you're doing at all times. Looting doesn't seem to be a good idea, especially amongst friends, unless you have the ability to back up your sticky fingers with steel. After a battle has been initiated, enemies won't always fight to the death. If things are going poorly, antagonists seem to have no trouble choosing the better part of valor. Combat to the death is sometimes unavoidable, but it is never routine. Battles in the beta are momentous and purposeful a majority of the time, something that makes sense in the context of the story beyond being an easy way to lengthen the game and provide some excitement.

The game's plot is developed using conversation, documents, and quests. Those who enjoy a ripping yarn with their role-playing games should be able to have a good time with Arx Fatalis' many in-depth dialogue sequences and books about a variety of topics. Tomes dealing with the history of Arx's kings, its gods and demons, the major races, and even the land's most noteworthy inventions (someone actually made a submarine once) seem to involve the player in specifics without delving into minutiae. The quests available in the beta seem to be of the traditional sort, although there appears to be a larger than usual emphasis on puzzle solving. As in the original Ultima Underworlds, you often have to look for an alternate route to get where you need to go, via a hidden passage, by pulling a few levers, or through the use of ready-made tools. The environment seems very natural in this respect, with numerous ways to get from point A to point B.

Building on this sinister atmosphere are the graphics and sound. The visuals are striking, though not quite contemporary. The monster models have been given unique touches to make them stand out from the crowd (particularly the trolls), the animations are somewhat lifelike, and the spell effects are incredible--drawing rune shapes on the screen sets off pyrotechnics that light up the screen like a Roman candle. The audio appears to have been a major priority as well. The background music varies in tone but never strays far from the ominous. Again, a comparison can be drawn to the Thief games, which used a similar hollow-wind effect with eerie tunes to stage an appropriately spooky setting. There seems to be a lot of voice acting in the game, and much of it is done very well. The lone exception is the main character, who is voiced in the beta by someone who at times sounds like he could be reading names from a phone book.

Overall, Arx Fatalis looks very impressive. Although aiming to be the successor to the Ultima Underworld series is a daunting task, Arkane may be on the verge of pulling this remarkable feat off. Check back with us at the end of September for a full review. 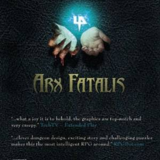