3DO's little plastic army men series has spanned the systems, from the PC to the Game Boy to the PlayStation and to the N64 - with Army Men Air Attack on the PlayStation being the only game to really earn its stripes. The company recently announced the development of the next Army Men game in the Sarge's Heroes series for the Nintendo 64.

Levels include locations as exotic as the dining room, a graveyard, a mountain zone, and the floor beneath a bed. The game will also include a multiplayer mode that lets up to four opponents battle it out with bazookas, shotguns, grenades, assault rifles, mortars, and more. The Air Cavalry will fly in to assist you, too, if you call them.

Army Men: Sarge's Heroes 2 will ship for the N64 in the fall of 2000 and will be RAM Pak and Rumble Pak compatible. 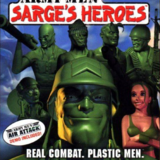