3DO releases a playable demo of its real-time strategy game based on combat between little plastic soldiers.

3DO has released a playable demo of Army Men: RTS, its recently released real-time strategy game. The 46MB demo lets players experience a portion of the full game, which is now available in stores.

Army Men: RTS is the first real-time strategy game in 3DO's popular Army Men series. The game lets players control a group of little plastic soldiers in a series of missions set in and around a typical suburban home. In addition to the story-driven campaign mode, the game includes eight quick-start scenarios and a multiplayer mode with 10 maps and support for both head-to-head and cooperative play.

Army Men: RTS was developed by Pandemic Studios, the studio that created Dark Reign II and Battlezone II. For more information, take a look at our previous coverage of the game and download the new playable demo linked below. We'll post a full review of the game soon. 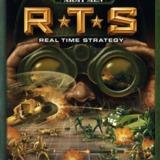