Fans of Turok, or first-person multiplayer shooters for that matter, should be excited about Acclaim and Iguana's latest title in the works: Armorines. If you haven't guessed, it's a first-person shooter and we got a chance to play it. Even though the game is still early in its development cycle, it looks like it's going to be a winner.

The story goes like this: Aliens have used up all of their planet's resources and start invading Earth in an attempt to colonize it for their own use. A special group of Marines is assembled to thwart the plans of the alien forces. Each member of the team is fitted with a special armor suit - hence the title of the game. The game is being developed by Probe and uses an engine that is a cross between Turok 2 and Forsaken. For the most part, Armorines looks and plays like Turok 2, although instead of blasting dinosaurs you'll be capping big aliens resembling giant bugs (think Starship Troopers).

In its current stage the game only had a limited number of weapons available, none of which was finished. One cool weapon was the arm of the suit itself; it shot bullets out the top of the right arm. The weapons will cause environmental scarring, which means that we immediately tried to write our names on the wall.

One interesting aspect Probe is working on is a two-player co-op mode that allows you and a friend take on the evil aliens in tandem. Levels range from large open outdoor areas like a volcanic creator to more confined indoor levels like a Siberian missile base. The game is composed of five different environments, each consisting of four stages. Since the game has two main characters instead of one, Acclaim is touting Armorines as "two games in one." 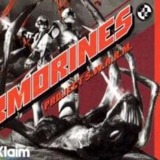