We got a glimpse of Planet Moon's zany third-person action game at a recent LucasArts press event.

Today at LucasArts' press event, we got a hands-on look at the company's upcoming third-person action game Armed and Dangerous. The game is being developed at Planet Moon Studios, which is known for its work on the critically acclaimed game Giants: Citizen Kabuto. Not surprisingly, much of the formula that made Giants such a favorite is present in Armed and Dangerous. Players can look forward to copious amounts of zany humor, characters with charming British accents, and no shortage of over-the-top action.

In Armed and Dangerous, you'll assume the role of Roman, the leader of a ragtag band of rebels. Through most of the missions, you'll be accompanied by a couple of sidekicks. One is a Q, a prim and proper robot who speaks with a British accent and drinks tea incessantly. Your other buddy is a Scottish mole called Jonesy, who has a rotten disposition and a sharp tongue that belie his chummy name. Together, you'll battle through 21 missions across five different environments, ranging from snowy areas to forests and mountains.

The game's missions range from standard run-and-gun action to objective-based affairs, such as one that requires you to liberate a village from the control of an evil king. You'll do this by destroying the buildings that have been "subtly" marked by the locals. As you play through the level, you find that the "subtle" markings are actually giant bull's-eyes that cover an entire wall. You're able to give simple directions to Q and Jonesy, such as to attack a target or defend you from enemies. You'll also find pubs on many of the levels, which let you stop in for a breather and to swap out weapons.

One of the most interesting levels we tried was a base defense mission that put us in control of a turret mounted on a rail that ran the length of our base's wall. We were able to slide the turret to any point along the wall and shoot machine guns, mortars, and rockets at the incoming horde of grunts trying to break into the base. In total, 1,800 enemies attempt to scale the walls of the base in this mission, and you lose if you allow 50 of them through. The absurdity of the mission was evident from the start, as we saw massive columns of grunts marching toward us in the distance. As the grunts closed in, they scattered and made a dead run at the walls as we gunned them down in their tracks. Firing rockets into groups of grunts resulted in their bodies flying right at the camera. Some of the grunts carried ladders, which made it easier for them to climb the walls. We also had to watch out for gigantic monsters mixed in with the grunts. These monsters, if allowed to reach the wall, would lift up the massive door of the base and allow grunts to stream in. The overall feel and tone of the base defense mission recalled the climactic siege from the end of The Lord of the Rings: The Two Towers film. In fact, you can expect to find many subtle references and jokes based on popular culture in Armed and Dangerous.

Possibly the most interesting aspect of Armed and Dangerous is the game's off-the-wall arsenal of 17 guns and turrets. While you'll be able to wield fairly standard weapons like sniper rifles and machine guns, the game's array of special weapons promises to be extremely creative. One weapon, the topsy-turvy, had already been shown off at E3. This weapon looks like a giant corkscrew. When driven into the ground, the topsy-turvy causes the entire world (in fact, your screen) to turn upside down, reversing gravity. While you hang on to the handles of the topsy-turvy, all nearby enemies begin "falling" into the sky. After a couple of seconds, the screen rights itself, and you'll see the enemies falling from the sky to their deaths.

A new weapon was shown off at today's event--the land shark. As its name suggests, the weapon fires a shark into the ground, represented by a menacing, Jaws-like dorsal fin that "swims" to a nearby enemy. Once there, the jaws and torso of a shark come shooting out of the ground, capturing its helpless, flailing victim and dragging him beneath the ground to his death. The shark then continues on to its next victim, constantly "swimming" around and attacking all the enemies in the area. Aside from being completely and totally absurd, the land shark is a useful weapon for keeping groups of enemy soldiers busy as you attend to other tasks.

Overall, Armed and Dangerous looks extremely promising. The controls felt crisp and responsive in the Xbox build we played, and the humorous cutscenes had us laughing out loud. The game is slated for release late this year for the PC and Xbox platforms. 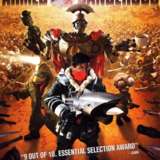