The 36-year-old block breaker is back and includes a 25-player free-for-all.

This new Arkanoid includes four ways to play: a new modern take on the classic block-breaking gameplay, the original retro experiences from decades ago, four-player local split-screen gameplay, and a 25-player online battle royale mode where the last one standing wins it all.

This is Microids's second reveal of a classic game franchise's revival, as the publisher announced Flashback 2--the return of the 30-year-old PC action-platformer--during Summer Game Fest Live on June 9.

Taito first released Arkanoid in arcades in 1986 as a simple concept: players would move a single platform in order to bounce a ball, which would then break blocks floating in the air above the platform. Break all of the blocks and the player would move on to the next stage, with each stage increasing the challenge until the player hit the game over screen. 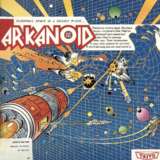