The esports-centric survival game will be released for PS4 on July 19 through the system's beta program. Survival of the Fittest is described as a "multiplayer online survival arena," and it focuses on offering a Hunger Games-esque multiplayer competition. It was first released on PC in March as a free-to-play spinoff of Survival Evolved, which is a more traditional online survival game.

Both games remain in development on all platforms. Survival Evolved is available on PC and Xbox One, with a PS4 version set for release in June. An Xbox One release of Survival of the Fittest hasn't yet been detailed, but we've followed up with the developer to find out its plans for that platform.

Survival of the Fittest retains many of the same elements of Survival Evolved, such as crafting, building bases, and taming dinosaurs. But it differs in that it pits up to 72 players against each other in a battle that takes place within an always-shrinking circle referred to as the "ring of death."

In addition to the main online mode, there's also split-screen and LAN support, as well as an offline training mode which might eventually see the addition of AI-controlled bots to compete against, according to a PlayStation Blog post.

Studio Wildcard will also offer the Survivor League on PS4, a sort of monthly tournament that offers real-world cash prizes. 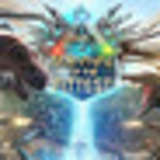